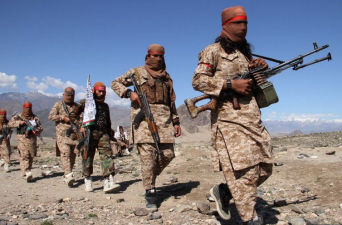 Who are the Afghanistan Taliban? is an index page explaining the history and beliefs (actions) of the Taliban focusing on those in Afghanistan.

While everybody on the planet has a freedom of choice in their religious beliefs, this freedom in itself is more a Christian and American position than that held by many in the world. Actually, other religions are in a holy war against those who do not accept their personal religion. Islam or Muslims are in this holy war against the world’s “other” religions. They see these “others” as apostates (a religious term for someone who turns down the true religion for some other). Afghanistan is about 99% Muslim, so those few who can survive in that country are rare.

The strictest Muslims have a code or law known as Sharia law, and under the strictest interpretation of that law, every Muslim is under an obligation to outright kill all non-Muslims. Taking another person’s life under this Sharia law is not a crime, but an act of fulfilling your religious obligations as a Muslim.

Many governments around the world condemn the Taliban as terrorists. So why do they wantonly kill people? With this sharia law in mind, the typical Muslim mindset is that it just irks them to no end that the Westerners have so much luxury and good things, and yet they are not Muslim. In a way, Allah, their god, should not be blessing them this way. So although some Muslim scholars would say that Allah condemns killing your fellow man, most Muslims see this as being a valid and good outworking of their religion.

I can personally testify to hearing doctors and medical personnel relate how the Muslim doctors and medical personnel gave each other high fives and were extremely delighted on seeing the towering burning on 9-11. How medial people could stoop so low only goes to show you 1) in America, there is little to no discrimination. 2) within our medical services, there are people who are there to only make money, and really don’t care about the loss of innocent lives.

Life Under the Taliban

If you read the wikipedia.com article, you will see how austere life under these people really is. Anything western is bad, and they want to push things almost back into the stone age. Note that for all the evil of western culture that we here today from the liberals, a great number of modern conveniences and inventions have come about by the environment that the western culture has fostered people to live better. Modern medicine is more a western culture child than a Muslim product. Airplanes were invented in the United States, and much or most of their growth and science are American products. So when you condemn America, notice that they are doing that on the Internet (product of American universities) using electricity (invented by an American), and sent on a laptop or cell phone most probably having its design made by American engineers. The hypocrisy here is deafening, but none-the-less, they are decrying America and everything that it stands for.

Modern Democrats are likewise in Bed with the Taliban

No matter what the Democrats says, their positions and attitudes about America line right up with the same hatred of America that we see in people like the Taliban. They are two peas in the same pod.

America gives Freedom of Speech and Opinions to All

While we in America believe that everybody has their own rights to free speech and politic views, note that this is not correct in regard to the Taliban. The Taliban wants to kill everybody that is not of their own political-religious view. While we will not accept their position, we will not accept just unilaterally killing all Muslims. Some through history have taken that position as a solution to the Muslim extremists like the Knights in England marching against the Muslims. But American views fall short of that, although we do accept killing terrorist cells which plot against the western world.

Note that liberals and Democrats are actually closing their eyes to what these terrorists do, and Joe Biden is allowing Afghans come to the US without vetting or anything. A free pass. With Biden doubtlessly he will give them cash money once they get into the US. Talibans could be sneaking into the US. Even that article is old news. Biden is flying them in from Afghanistan without vetting either.