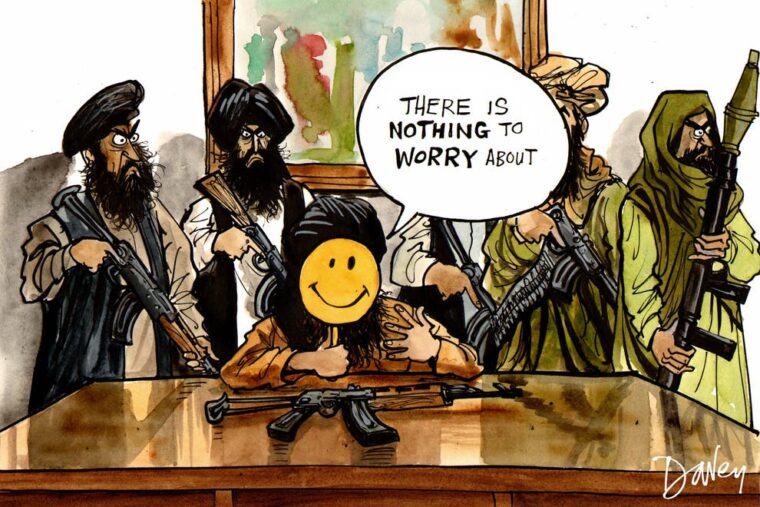 Biden is AWOL on Afghanistan is an opinion piece on the news of Afghanistan’s fall to the Taliban, and Biden’s part in this.

Leadership is the Key

Let’s be real here. What is happening in Afghanistan is just a matter of leadership. President Trump caused fear in many countries around the world. He did not cause such fear in our allies, but in our enemies. They were afraid of him because he did hard, drastic things to cause them to respect President Trump and stay out of his wrath.

With Joe Biden, our enemies have learned from observation that Joe is just not a person who even knows what is going on, much less is he on top of his game. Joe is blaming President Trump for everything happening in Afghanistan. But Joe has had 8 months of being president, and he has had plenty of time to make arrangements and step the Afghanistan withdrawal so that this would not happen.

Quick to draw, slow to fire, never hits his target

What we are learning about President Joe Biden is very simply that he is quick to do things, slow to actually do things that make a great difference, and his judgment is just purely poor.

In government, when you are the head of the most powerful government in the world, you do things in a consortium. That is, things are studied as to their effects and consequences, and then actions are planned well in advance, and studied to no end before any action is taken. In this case, the US military is who will do the withdrawal of US forces in Afghanistan, and the State department will do the cleanup after they leave.

But there are a few problems here with Biden. First, he is not in charge of the country. He has no will. When he does express his will with a real decision, his judgment is always poor. This is because the people calling the shot in the White House are Biden’s advisors, not Biden actually. Secondly, when a leader does what is told, he does not a) understand the situations he is governing on, b) does not understand the consequences of different actions, c) is not going to answer for his actions to the general American public, much less special interests that probably should be considered. Those Arab nations that are not favorable to the Taliban for example.

Biden misses the mark as a President

Biden is floundering right now under the pubic negative pressure of another Saigon happening in Afghanistan. Being a Democrat, he simply is out of touch with reality.

Biden is AWOL on Afghanistan. In other words, a true leader would be in front of the nation explaining, reassuring, and making orders to prevent a disaster. Biden is hiding. This has been characteristic of Biden since the days of his campaigning against Donald Trump.

Fierce Campaigning between candidate is a Vetting event

What Americans seem to have forgotten in this election cycle is that the campaigns of the different candidates are vetting events in which the American people see what the metal of each candidate is. Whatever you opinion about Donald Trump, he is a leader. We don’t always agree with or even like our leaders but they do a job. When they engage in affairs, in problems, in situations, then we like that they are at least doing their job. Biden is AWOL on Afghanistan. We cannot get over this failure on Biden’s part to plan and correctly execute a simple withdrawal.

There is no excuse or reason to blame Don Trump for this. Biden sat down and wrote 7 presidential orders his first day in office, but the Afghanistan withdrawal was planned by Trump way back in 2020, even before Biden was elected. He had no time to deal with this? He had no thoughts? His people didn’t investigate this? They overturned everything Trump did but this they didn’t touch except extending the pull out date? As Joe would say, “Ah, come on guys!”

The real problem here is not the Taliban, but Joe Biden is incapable of leading in a good way. He is a Democrat and that pretty much sums up all of his problems in a nutshell. The Democrats are not good governors, policy makers, and they are not good leaders. Their only talent seems to be in a negative way to oppose Republicans, specifically Donald Trump. Beyond that, they cannot function in a real and efficient way. To solve problems, they only throw money at them. Every time they do that, a large part has to go to their Democrat operatives in government. Inefficient.

The moral problematic element of the Democrat agenda is very simply they use whatever issue to push their own power. They cannot discern between right and wrong, only what seems beneficial to them, or what doesn’t, and even that changes with the wind. They lie to cover and deceive the people instead of telling the truth.

To understand this, the problem with lying is that other people do not care about your lies or your public perception. The Taliban is going to revert to what they really are, thugs. In doing so, they prove Biden either is lying and knows it, or is without any real discernment as to who they are. Biden is self deceived.

The US Military’s Crisis

We need to explore what all of this means. Where are Biden’s military advisors over these 7 months? Biden has been very busy in the US military. He is moving officials and officers around within the military. We know that very well. Biden has repurposed the US military to be woke. So while the US military was being woke over these months, they were not doing their job of evaluating and advising the president of the facts of the situation, and what could possibly happen.

This is true, or the other side is true, they did a good job advising Biden, but Biden and his personal advisors decided to do something else that was not what the joint chiefs would advise. This is even worse actually. Joe Biden won’t listen to his advisors. He won’t take it into serious consideration. Dementia and just being stupid and not understanding people and life are affecting his decisions. That is very bad. As a leader, most great people fall because of ignoring good advise from their own people.

Biden is AWOL on Afghanistan, he is pathetic.