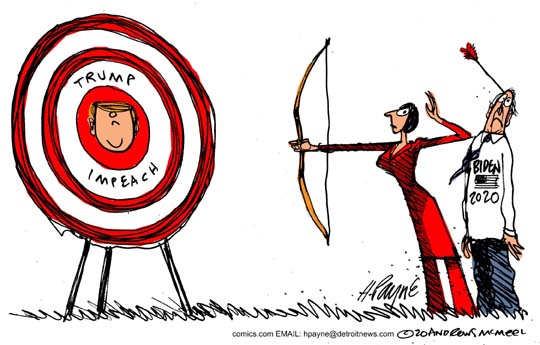 Calls to Impeach Joe Biden Since Democrats used impeachment against Trump, some are calling for Joe Biden to resign for improper decisions and actions.

Note: If Governor Cuomo has disgraced his office by his sexual exploits and wrong judgment over the nursing home Covid 19 scandal, and Biden recommends that he resign because of that, then it is 100% correct for others to demand the same in the case of Biden himself.

Perspective on the Election

For four long years, actually since Donald Trump was elected, his four years as President, and for months after he left office, the Democrat party has not ceased to impeach Donald Trump from his elected office. The 2020 election was most undoubtedly fixed through election fraud. There is no way somebody who had problems getting more than a few dozen people in a campaign rally out could be a sitting president who had literally overflow crowds of 30,000 people at his rallies that slept in snow in order to get in a few days later. If you study how much Bill Clinton, Al Gore, Barack Obama, and Hillary Clinton among others, those in the recent elections cycles worked in order to win or even compete, it is completely unbelievable that Joe Biden won any other way than fraud.

Impeach Donald Trump for ever

Impeachment is allowed in the Constitution of the United States for any sitting public official, or governing person in office. But Democrats have taken their hysteria to extremes by pushing for an impeachment of Donald Trump even though he has left office. Why their open plan is in doing this is to prevent Donald Trump from ever holding a public office once again.

Yet their are no valid reasons for impeaching Donald Trump. What he did was a little surprising, and he doesn’t mince his words with people, causing people to be set back by his frankness. That is different for Americans coming from their president.

But although the impeachments of Trump have been extremely injected with partisan politics, you just cannot meet the Constitution’s requirements for impeachment simply because you dislike the fellow.

To be impeached you have to do something wrong

This is the sticky point that the Democrats never accomplished. Trump did not do anything wrong according to the Constitution or US law, and they could even less prove that he did something wrong. In our recent history, and even in our not so recent history, politicians step over the legality line frequently. To find things wrong with Bill Clinton, Hillary Clinton, or Obama, there are just so many things that you have take your pick among a lot of things. Hillary’s hidden server in her bathroom has no problem with proving that.

Joe Biden is a presidential Disaster

As presidents come and go, Joe Biden will stand out for a long time. Even the Democrat party with their loud bellowing of attacks, slurs, and demurs again the Republicans, and their Democrat party instrument, the media, they are just cannot cover up very well the blunders and errors of Joe Biden. He is doing exactly what the Democrat party is telling him to do, and it is not going well as far as Public Relations are concerned.

At one time, America was hanging by a thin thread on what OPEC did with oil prices. Trump entered office as President, he confronted this problem, and even though Congress fought against him at every step, Trump made America oil independent. Moreover, America was selling their oil to the world, making friends and allies by doing so. In the matter of days literally, Biden crippled America’s oil strength making us once again dependent on others. We pay other countries for their oil, while Biden cripples America. Most of those union jobs in the oil industry were Democrat voters, which I am sure they will remember their party in the next elections.

The United States Constitution gives Congress the right to permit and limit immigrants from other countries. The Congress (both Democrats and Republicans) has made laws concerning how and the conditions of immigrants as far as legally being in the country, and to become citizens. That is all part of the US Constitution and the laws on the books of Congress.

But when all is said and done, Trump’s immigration policies were working perfectly, and illegal immigration was at all time lows. Biden stepped into office, and in a matter of hours, he undid all that Trump had achieved as far as immigration was concerned.

There is a federal judge that has recently ruled that Biden must return the country’s immigration policies and practices to what Trump had working. What he is doing now is illegal and extremely burdensome on the states.

Biden broke his oath to uphold the Constitution

But wait a minute, the oath of office is that Biden swore that he would uphold the laws of the country and the Constitution. They are the same thing. So if Biden is not upholding the Constitution, then he has broken his oath of office and needs to resign or be impeached. Thank you Nancy Pelosi for making an uncommon and very rare thing, impeaching a president, and making it ordinary and very useful when needed.

Within government, there is a rule (or should be). Whoever doesn’t do his job to the best of their ability should either resign or be fired. If they cannot do their job or never were up to it, then they likewise should be removed and somebody who can do that job take their place.

With Joe Biden’s situation, he himself is not up to doing his job, so he should resign or be fired by the American people. Come 2024 if Biden is still in office, he will be defeated or not run a second term. But we never see government employees take that long. Biden released or fired multitudes of people in different positions when he entered into office, and that was because he didn’t think they were the people who would do the job he wanted done. All of this should be applied back on Joe Biden. With the unemployment that Biden has caused, the inflation, the problems, he should be removed from office.

Perhaps at one time, the Democrats planned to make Joe Biden president only to shortly thereafter resign so Kamala Harris could enter into the presidency. Unfortunately for the Democrats, Kamala is worse than Joe. This leaves them with a perplexing problem. While Kamala being more extremely leftist than Joe was a poison pill for the Republicans if they tried to impeach Joe, (thus being stuck with an even more leftist in his place), that plan backfired on them, because Kamala is not even wanted among the Democrats. Her personality is in collision with anybody trying to tell her what to do. She cannot get along with her own staff, and she is clueless at doing things that politicians do every day.

Another point of people with serious mental health issues is denial that their own actions are responsible for their outcomes. Biden simply cannot see this, and this is a common malady among our lawmakers, especially Democrats.

The 25th Amendment may be applied to Oust Joe Biden

The 25th Amendment was put into place as law when Ronald Reagan was shot. The law simply gives the country a legal way to make somebody else president if the current president cannot perform his duties. In the case of Reagan, he was to undergo an operation to remove the bullet, and shortly after he came out of anesthesia he took the powers again.

In the case of Joe Biden, his mental problems will not go away ever. He is too old for the job, never should have even been considered, and he is not executing the job with the mental ability a president needs. That is seen so clearly in the problems with the withdrawal of Afghanistan. It is not like there is nobody to plan this correctly from the beginning. The Pentagon has contingency plans for things like this, and Biden only had to ask them or listen to them in what he ordered. A frequent problem with older people with mental problems is not just that they forget or cannot think well, they become stubborn and want their own way when that is detrimental for all around them. This is where Joe Biden is at in his life. The humane thing is to remove him. Nancy Pelosi is about in the same boat. If the Democrat Party cannot field a candidate in good mental health under 60 years old, they shouldn’t put up any candidate.

To be truthful, nobody can impeach a president except the House of Representatives, and the Senate decides as a jury/judge. So in the present situation, not even Republicans will be doing any impeaching. The Democrats won’t let that go in the Congress. But in the 2022 midterms, if the Republicans overtake control of the Congress, we might see an impeachment motion on Biden happen. Remember, the election is in November 2022, and those newly elected will take their offices in January 2023. That is when impeachment will happen if it does happen.