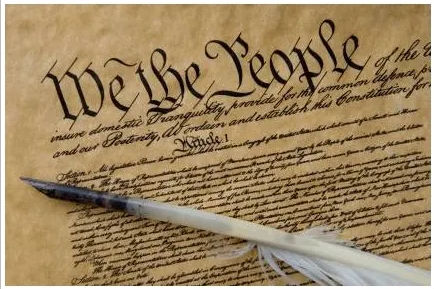 This is a Republican vision versus Democrat vision matter. Within the framework of the US Constitution, certain people find that they are very much restrained, and this falls very heavily upon those who are Socialists or Communists. The laws of the Constitution restrict what they want to do, which is take advantage of people. Let’s understand very clearly what the frame of mind of these people is. A Socialist is a person who believes that the government can best decide, control, and administrate resources of the nation. Sounds good at first glance. But these Socialists only bait and then switch what they are plying. If you study the history of Communist and Socialist countries, it has never worked out well for the common folk of these countries, yet while they espouse everything is shared equally, the very leaders of these countries live the life of billionaires, not having begun in government with that much money at all.

Before and during the setup of this system, they are quiet and of little influence other than pushing for their changes to the system. Once the system has taken over, then they begin their crimes of reaping the labors of others. What we have seen in other nations is a steady, constant testimony to the humanity of mankind, man’s abuse of man.

In Russia, the cruelty of the dictators to force their people to obey their control is very clearly established in their history. In China likewise. North Korea is very cruel to enforce their people into submission. From what I have read of North Korea, they have a radio in every home that broadcasts the Communist propaganda all day long. They cannot turn it off, nor can they turn it down. On the “emperor’s birthday” once a year, they are given a ration of meat, and at other times the only meat most of the people get are rats and other rodents that they may kill. Cuba and Venezuela are little different.

So, a Communist is what a Socialist becomes after “cooking” for a while. While Socialism is more a general tendency, Communism is an iron fist.

What is the US Constitution?

Read a copy of the United States Constitution

The US Constitution is a set of principles by which we jointly live and work together in America. The Constitution was created by very wise people who understood the humanity of mankind, and this is basically that if government does not restrict incorrect behavior, then one person will take advantage of another person. It is simple to fix this, let a dictator take over and decide everything.

But the US Constitution is the creation of our founding fathers, and their point was to prevent dictatorships within our country. In fact, the United States (correctly interpreted and understood by past governments and our people) have fought wars with other countries. In these wars, we discerned that for example Tito and Hitler were dictators forcing their own people and other peoples within their country and outside of their country into submission, and torturing and killing them. America fought against dictatorships. Even the US cold war with Russia was an ideological war, their system was iron fist dictatorship, and the US was democracy. We are actually a Democratic Republic.

What is a Democratic Republic?

A Democratic Republic is a society that is based on rules and principles (the Republic part), and decisions are made by the will of the people (the Democratic part). There is a lot of confusion about our system of government.

Democrats typically interpret all law as pliable as they as law makers want it to be. So, in theory, if killing another person in cold blood is against the law, the Democrats can change that law to make it acceptable by putting that to a vote. That is how the Democratic mind works in all of this. Whatever they can convince others to vote for in majority becomes the new law. The problem is that they are as poor in convincing people as they are in other areas, so they must resort to rigging the elections, because their arguments don’t hold water.

What should be the Republican position here (which we have infiltrators that don’t hold to Republican precepts but want to identify as Republicans) is that we have a vote on things within a range under these “eternal principles” which the Constitution recognizes. I say that the way I did because under our history, we bring these principles from England and back to ancient Rome, but many of these overruling principles or precepts are from the Bible. Therein is the rub. If a person rejects God, rejects God’s rules, then they also want to change these eternal principles to what they prefer today (tomorrow they may change their minds). Laws cannot be that way. Businesses and people’s lives are based on what these principles are and changing them totally changes the decisions that they make.

If banks are to be entrusted with our money and they cannot just steal it, then people can trust their money to a bank. If that changes suddenly and the government can take part or all your money just because… then people will not use banks. We can put a safe in our house or business to keep our money, but what if the money is devalued by the government?

So today we see an assault by Democrats and Rhino Republicans on these eternal principles of God within the legal framework of our country. They consider these eternal principles like a whiteboard in school that the teacher writes on it and then erases and changes whatever and then rewrites it, and then erases some more and rewrites things again. The framers of the Constitution did put provisions into the Constitution for its change if something is so important as to need changing, and slavery was one of those things. (All Democrats voted against freeing the slaves. All Democrats voted against giving the slaves the right to vote, and giving women the right to vote. That tells you a lot about their perspective on freedom.)

But there are real problems, deep problems here. First, the Constitution and framers of the Constitution did not give anybody any rights or privileges. They recognized that God has given all people, men and women, certain privileges, and rights. The Constitution simply recognizes these principles and defends them within the legal framework of our legal system.

The right to free speech is not given to us by the Constitution but by God. Our US Constitution defends what God has given us, and therefore is good and right. But notice a few things, first, if you deny God, His existence, or His authority to order things in the world and our lives, then there is the rub that irritates some people.

What the Constitution does is to prevent other people from pressuring you in your speech. Today, the Democrats and liberals say, you cannot cry fire in a crowded theater. It is wrong. Why is it wrong? It is not wrong at all. If there is a real fire, why would it be wrong? It would be wrong NOT TO CRY FIRE IF THERE IS A FIRE! But the point is, without the morality of the Bible, everything breaks down horribly, and that is where we are today.

The Bible demands, commands us to not lie. So, the problem is fixed another way. Instead of making the law, you cannot cry fire in a crowded theater, the Bible says you cannot lie, and the Old Testament abundantly shows law after law, and precept after precept that teaches us that you are responsible for causing damage to your neighbor’s welfare. If you have a bull and it gores somebody, you are responsible (morally and economically).

So, the illustration of cry fire is just wrong. If you cause people to get hurt, die, or get inconvenienced by your lie, no matter what, then you are responsible, and it is wrong. If there is a fire, or you see smoke and think there is one, it would be right to cry fire. That is the same principle on the flip side. What you should do to be responsible for your neighbor.

Satan is tricky at twisting things around to make white, black, and black, white.

While we hear endless examples of the fire in the theater illustration, and how that justifies limiting our liberty to free speech, but that principle of my responsibility to my neighbors was totally blown away and ignored in the riots in 2020 where there was great private and public property damage. So, are these eternal principles just temporary to be thrown at your enemies when it suits you but to be thrown away in your own case?

Another example of this is “It’s my body, and I will do with it what I want.” We have heard that a lot in the argument over abortion, but again, the other person is the baby, so this argument is flawed even though it is what prevails in the thinking of a large portion of Americans. Then comes Covid 19, the Wuhan Chinese Virus, and suddenly, your body is the government’s charge, and you have no say so over whether you get the vaccination or not. Again, as in the book Animal Farm, the rules are on a whiteboard, and are erased, changed, or just deleted all together as we go along. Notice that this is a dictatorship at work.

Is the Constitution a whiteboard or set in Stone?