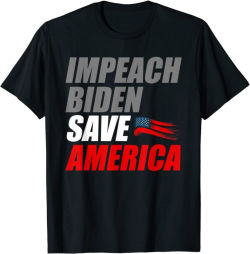 Impeach Joe Biden is an index page and links to articles about Impeaching Joe Biden. I make some general comments about this below. Biden’s cognitive decline is also in view here.

First, “the Good.” Joe Biden as a president of the United States has implemented a wish list of Democrat and liberal causes. This has hurt the economy of the United States and has caused a lot of problems. Many people have lost their jobs and prices and inflation is going up. So on that front, a lot of people would like to see Biden vacate the presidency. A lot of Democrats that voted for Biden would seem to have buyer’s remorse.

But we must remember that the founding fathers did not see a simple disagreement with the president (maladministration) as grounds for removing him from office. We have passed 4 years of the Democrats trying to remove Donald Trump basically because they did not like him nor his administration. In England, they can call a snap election, and the sitting president (prime minister over there) has to go through essentially another election or he steps down and somebody else takes his place. This places every president in a precarious position of being removed at any time.

Second, this is really a bad situation. Since Nancy Pelosi has tried very sternly to impeach Donald Trump, she has opened Pandora’s box in this matter, and now payback is upon Biden. Truthfully, I do not think ANY of this is good. I don’t think she should have tried to impeach Trump, and I don’t think impeaching Biden (not that that is very easy to do either) will solve a whole lot of things. This just bringing war to politics instead of working together. Now anytime a group dislikes what a president of another party does, he will be impeached (they will try it). Impeach consumes the political forces of government while it is going on, and it destroys the ability of the president to deal with the issues of the day. Whether I like Biden or not, he will have a lot of problems as president if the Republicans take over the House in 2022. Biden does not need any more problems than he already has. Thanks Nancy. Now it is time for you to run into retirement, now that you have destroyed our country with your stupidity.

Thirdly, if tomorrow Biden resigns because he sees this coming, what happens? Kamala Harris steps into his presidency. Will she be any better or even much different than what disaster Biden is experiencing? I doubt things will go any better for her. So they will use another impeachment for her. We are thus a banana republic at that point or even now.

The Crux of the Issue

We have to focus on a single element here which is the constitutional reason for impeachment. When a president enters the office, he has to swear to uphold the Constitution and the laws of the laws enacted by Congress. If he fails to do that, he should be impeached.

Joe Bide has failed multiple times to even attempt to uphold these American principles, Constitution, and laws enacted by Congress. Everybody can lament and feel disappointed at the laws of the land for one reason or another. For instance, whether the immigration laws are too stern or too lax. But as a sworn officer in America, they have to uphold the law or integrity would demand that they step down from their office.

There are other issues such as what Democrats did to Trump is valid to do to Biden. But these are outside of the Constitution. We are dealing with legal ways to deal with Biden’s actions under the Constitution.

The purpose of the 25th Amendment was to bridge the gap when Ronald Reagan underwent surgery and could not be responsible for problems at that unconscious state. It had the purview of a temporary thing for the president and that was to be lifted shortly after the operation, and the president was to take charge of his duties once again. That is not the situation with Joe Biden.

The Democrats and Republicans are wanting to use that as a way to make him step down. The Republicans want him to step down now, and the Democrats are holding this as an option if they cannot continue to control him. Neither position is correct. This was not the purpose of the 25th Amendment.

The push to Impeach Joe Biden will be good for Republicans campaigning to get in office or stay in office for midterms. Our politicians need to stand up and live and govern above this poor revenge tactics. We do not need Biden out then, all we need is for Biden to tone down everything he is doing, work with the Republicans, dump the wokesters and extremists in his own party (The Squad’s “Cancel Rent” Hypocrisy), and try to understand what is good for America, and stay out of breaking the existing laws of the land. That seems to be an extremely difficult task for him.

The list of reasons to impeach Biden are very long. But we should go back to the 2020 election and overturn it. Biden was not the legitimate winner of that election, and placing pressure on anybody that says so is just wrong. If you go back to previous elections, Democrats as a rule always want to contest any election they lose. When they win, it is anti-American to question election results. Really? How convenient this is if you are a Democrat.