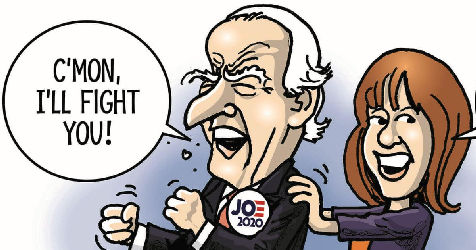 Biden’s Cognitive Decline is an analysis of the mental, cognitive etc. problems in Joe Biden’s head.

Let’s examine this closely. There is nothing wrong with getting old. Everybody that lives so long will be doing the same some day. We protect the elderly. And although we take the elderly out of the loop of making dangerous and very important decisions that affect other people, we still honor them. That is the Bible way. God promises long life to those who honor the elderly. So we do not want to be disrespectful of any elderly person.

But Joe Biden needs to be under care in a nursing home, and not making decisions for our country.

When you combine the “memory slips” with a pathological habit of lying, that kind of person really should not be trusted. The warning signs are very strong and many.

Moreover, Joe Biden has surrounded himself with people in his cabinet that are just yes men and people just as bad as he is. Kamala Harris is not as old as Biden, so there is no excuse for her errors, slips, and lies. But Biden has chosen people that are labeled “Democrat” over people who know their area of expertise and do it well.

Secretary Yellen is another example. She supposedly is an economist, but she has totally given herself over to whatever the Democrats tell her to do, and she is not shining very brightly as an economist. When she was “surprised” last summer that inflation was hanging on so persistently, that comment showed either her ignorance or her submission to the Democrat talking points. Either way, she is not a good influence on the president.

It is very apparent from Biden’s statesmanship that 1) he is befuddled in her own thoughts, 2) he has problems with expressing himself and public speaking a.k. John Fetterman. 3) He has been this way for years and years, because this same gaffes have cropped up in his speeches for many a year now.

The first problem here is that he twists reality to fit what he wants. When I say “twist”, that is a nice way of saying he lies. The problem with Biden (and this is contagious among most Democrats) is that when stupid people live and govern by the principle of making up lies and telling them incessantly, that people will believe them, that only works for other stupid people like themselves. But the Democrats problem can be seen best by Hillary’s presidential campaign. The pollsters don’t do polling correctly, they always poll heavily Democrat areas so the results are slanted favorably towards Democrats. That is supposed to give them the advantage at election time. But these Democrat candidates forget that they have affected the polls so that they are not true, and then they believe that they really are ahead. Hillary refused to campaign in some areas “because she was ahead in the polls”. Add laziness, sickness, old age, and a heavy dose of wanting something for nothing because “she deserves it”, and you lose.

That is exactly what Biden is doing. He has his propaganda arm in his cabinet and in the Mainstream Media churning out “everything is good”. But Biden himself probably believes it. The only “rain on his parade” is when people who are analytic (i.e. they have money in element of correctly knowing what is real), and they point to the facts. In this case, a lot of Republicans are doing exactly that.

The United States is in a recession. But a recession is not what somebody declares as an emergency, it is the actual state of the union. The common citizen knows if there is a recession or not because what determines it is the pile of bills on his desk and the lack of money in his wallet. That is the determining factor that we are in a recession.

You can deny that there is inflation all you want, but when you put gas into your car to go to work, when you buy groceries, you are reminded very abruptly that we are in a recession.

The president’s cabinet is supposedly made up of very smart, expert people who can 1) detect what is right or wrong in their area of expertise, and this comes from their own studies and experience, and from a talented insight into their area. 2) they can advise the president convincing him of the reality of the situation. 3) They are well able to discern how to fix the problems without other consequences that will bring their own crises and problems.

The problem here that we are experiencing with the Democrats is that they have an agenda to destroy America, and they are forcing that agenda down America’s throats whether they want it or not. These extremely grave decisions are not made by the lawmaking process (both houses of Congress vote and accept it by a majority) but by presidential executive order. The purpose of executive orders is to make laws under the president for the nitty gritty how to of implementing what the Congress has passed into law. It is an abuse of executive privilege to instigate an executive order when there is no congressional law outlining that action.

We return to elder abuse. When a president is older, befuddled, cannot express himself well nor can he think for himself well, then others around him begin to “put words in his mouth”. They tell him what to do. But he still thinks he is in charge, and this causes hilarious misspoken words. The White House has to constantly “walk back” what the president says. Biden almost is getting us into a nuclear showdown with Putin. Historically we have used our nukes to deter, not to actually wipe out our enemies. But Biden is in old senile man’s syndrome of carrying things too far.

Even the same Democrat party seems to be toying with removing Biden from office before his time is out. It would appear that would be more of a when rather than are they going to do it.

Double Standard between how they treat Biden and Trump

If Trump had done just a fraction of what Biden is manifesting as a feeble, senile old man, the Democrats would have removed him a long time ago. But Trump, for his age, is still very on top of his game. Although he has advisers, it would appear that he has a good gripe on reality, and they advise him, and they do not totally control him.

But this is our world. The Democrats control the media, the FBI, and the DOJ. They cover up their own weaknesses, and try to paint some other reality than what is our reality, and try to sell all that to the American people.

The idea that “sufficient time has not passed for our policies to kick in” is ridiculous. Policy usually has the effects that it is going to cause with in a few months time. Give it 6 months. But you can kick a cow all day long and that will not make it produce milk. You have to feed a cow and keep it from being startled for it to produce milk.

Democrats are billing themselves “as experts in governing”. But when Trump was elected, he had his policies. America responded BEFORE HE IMPLEMENTED THEM. With just being elected (with those policies as what is his mission as president) things jumped. Equally, when Biden was elected, the country tanked on just the news of a guy being elected president with his policies. Kill energy in this country, push LGBT down everybody’s throat, manipulate the economic markets to make them green, etc. These goals kill businesses. They knew it and responded accordingly because the people in business know that these are economy killers.

But it appears that what is good for the goose IS NOT GOOD FOR THE GANDER. We cannot press Joe Biden on what he is doing, because that would be “elder abuse” on our part. But the Democrats kicked Trump around to no end, and they continue to do so. This is raunchy hypocri