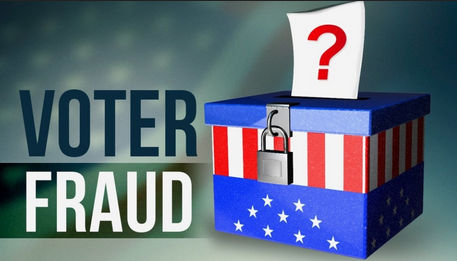 Ancillary Evidence of Election Fraud is an opinion piece about how we can substantiate the results of our elections through ancillary evidence, evidence besides what the ballot counters tell us.

The Fraud is Really Happening

Let’s be honest about this. BOTH PARTIES scream election fraud when they lose. This is because we are not putting up people (in any political party) that are really adult, mature leaders. An adult mature leader would admit defeat when it hits them. They would not make excuses except that they and their policies are not what the people want.

But the truth of the matter is that things just don’t add up. First it was candidate Joe Biden locked in his basement having almost no public speaking appearances, and yet he wins. They few times he did go out, between what had to be Secret Service agents, Biden’s own staff, the news people, and police for crowd control, we saw basically a few dozen other people there. Then we see Trump’s rallies with literally over flow crowds at places that hold 100,000 or more people, and those people were standing outside in freezing weather for a day in order to get into the place. This makes absolutely no sense. There may be an outlier out there that this would happen once, but when the entire campaign time is filled with more of the same, it is hard to believe what people tell you.

Secondly, we see the case of John Fetterman. I mean, really guys. I feel for the poor man, but it is abuse to force a man with these mental and speaking deficiencies into public service. It is not like he was a great public servant before this, and this debilitated a great man. Nobody has heard of Fetterman before the last few years. The Democrat party is truly dredging the dregs of their party to field anybody for public office. Bill and Hillary Clinton, as well as Obama were dregs too, but this is just getting ridiculous.

See Gregg Phillips Explains Why He and Catherine Engelbrecht Were Sent to Prison: “we have irrefutable evidence that the entire PA voter registration file is living on a server in China—serial numbers, ballot bundle numbers”

the Democrats have 82% of the vote, and Republicans are at 16%. Meanwhile, the majority of the state is red. (cited from the article)

So we can safely conclude that China is America’s enemy even though that is not so clearly seen in how we buy their junky low quality products. But the article explains how our election registrations and election ballots are being housed on China servers. I mean if you wanted China to affect our elections, you could not hand them an easier way to do it.

Many times elections are very close, and an election goes to one candidate or another by only a few votes. But that really is a difficult thing to handle. A few fraudulent votes by people outside of the voting area, by “dead people” using mail in ballots to vote, or for felons voting when they should not vote (as per the laws of the state), and you will have these few votes.

But in times past, poll watchers OF THE CANDIDATES ON THE BALLOT were always allowed and mostly encouraged. We have passed fair and transparent and now we are in the dark of an obscure night where underworld characters are the ones who count the ballots.

SUGGESTION ONE: Why not use paper ballots and dip the voters finger into indelible ink?

Many third world countries have done this for years. Most of these countries also have a voter ID which has the voter’s finger print on it and recent photo. Why doesn’t the United States do that? If the Democrats cry election fraud at times, then everybody should be good with this. It is extremely hard to circumvent this kind of election scam.

Voting machines are just not needed. The entire reason at first of having a voting machine was in order to speed up the counting of ballots at the end of the day. We now have a month long period, so we are going backwards, and in the mix, we are seeing the open doors of counting fraud.

SUGGESTION TWO: Limit the election to a single 24 hour period, and everything has to be counted in that period or redo the election.

The problem that is so apparent is that the more time unknown, unelected “vote counters” can manhandle the actual ballots behind closed doors, the more you lend opportunity to election fraud. To REDUCE the time and opportunity that they have with which to perpetrate fraud is to everybody’s advantage.

SUGGESTION THREE: Ballots cast but not voted should be highly guarded. Also, all ballots should be available afterward for analysis to verify the election results.

At one time in the past, this was somewhat true in most places. But somehow in all the elections and their goings ons, poll watchers for the candidates are no longer allowed to always be with the ballots until they are counted. Why? If everything is on the “up and up”, then that would be a detail of elections we should fight to maintain and not throw away.

Although this in itself doesn’t prove an election fair or fraudulent, it is ancillary evidence. It is a usual rule that whoever wins the presidency also has his party winning lower races. Why didn’t this happen with the 2020 election?

If we really want fair elections, we listen and concede certain points to our opponents. We always listen to them. This is courteous, but it is necessary in having an election fairly done. Secondly, if using paper ballots and voting only on one day is something that doesn’t involve any real hardship, why not do it? Why are Democrats so crazy about all people voting? They want people to vote, but isn’t that what the law (now very old) that allows voters to leave their place of work on company time and go vote? We conceded that would help everybody to vote. But what is being pumped up is that anybody, literally ANYBODY, even non citizens, should be given the open door to voting in an election when they are not even a citizen of our country.

It has been practiced that a US citizen that breaks the laws of our country will have to pay with his loss of his voting rights. Again, not EVERYBODY has a right to vote.

But this is how this goes, if Republicans start using the same methods of ballot harvesting, double and triple voting, dead people voting, etc. that Democrats use, then those things become highly illegal, but while the Democrats win elections that way, they are okay.

I have a novel idea. Why don’t the Democrats put in their candidates policies, policies that 1) work to benefit Americans, 2) that the citizens of this country want? I see them falling all over themselves for rights of criminals and illegals, but not giving the citizens what they really want. They cheat at elections to stay in power. They should use debate and sound logic grounded on much indisputable evidence to come up with policies that are hard to refute. That should be their tactic instead of using marginal ways to get and stay in office.