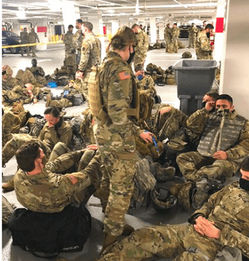 Trump Invites Troops to his Hotel in DC. This opinion expresses my feelings about President Donald Trump.

The present opinion piece was generated by my reading this article,

Yes CNN and company won’t print this kind of news. Only what is politically correct to the Democrat party. “Opening your establishment to cold soldiers waiting to go on duty again is sedition,” remember that. At least to the Democrats.

First of all, I cannot wait for Trump to run for President again to straighten out the mess the Democrats have made of the US. But this guy just has class. His class is so unrecognized, so unseen among Democrats, and so much the Democrats cannot even understand the kind of class this President has. He was my president for the time he won, and will always be my president even if the Democrats put him in jail, or even try to execute President Trump. I will still love him. Read AmericanThinker.com. They have some articles that tell a different story. The Democrats are running scared. They are winning in a landslide, they squeezed in by cheating and more and more things will come out (many already have been exposed).

Second of all, Nancy and Chuck hate America, but they loathe the military. When did Trump feel the need in 4 years of constant attacks on him to call out the National Guard to supplement his personal security guard? Did you know many of those troops called in to keep people (Democrat or Republic) off the streets of DC in the inauguration turned their backs to the Biden motorcade as he passed? They did it in masse against him.

Third, let’s think a minute about all this and put this in perspective. President Trump who was literally torn to shreds every day in the press and by Democrat congressmen (in English the male “men” can include also women. Sorry, get used to it.) But President Trump never felt challenged enough to use National Guardsmen this way. Maybe President Trump is pro gun and has a really big gun in that black limousine with him.

Ok. Get what the Democrats are trying to feed us.

Okay, we got it. The force of the executive branch of government is non-essential. Then some questions about Biden’s conduct.