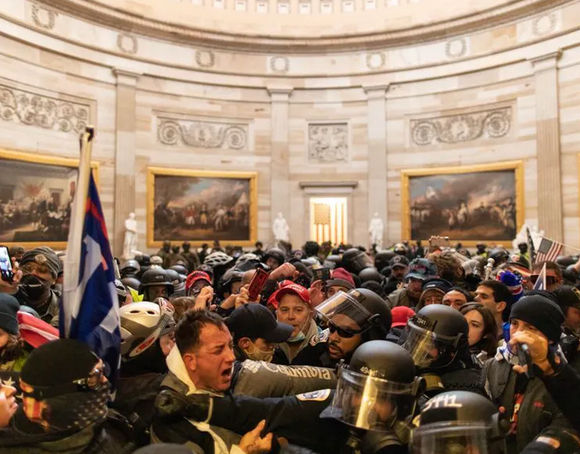 Capitol Breach was hijacked explains how this pacific event was hijacked by bad actors to cast infamy against Trump and Trump supporters. While Trumper supporters through this past year have in general been pacific in their marches, the Democrats have constantly projected the image that they are the destructive ones, egged on by their leaders, especially Donald Trump. But this is simply not the truth about them. If we even compare what happened with the Capitol Breach against what BLM and Antifa have done in the past year, their destruction was excessive, and their aggression against police was also extreme. But this breach at the Capitol was arranged by a Democrat thinker. It is exactly what they project the Trump movement to be. Sure, there were Trump supporters present and they organized the march, but being pacific, it was easy for other violent elements to take over the march and drive it to what they wanted.

The one key element in all this that stinks to high heaven is that the forces that protect Capitol Hill stood down, and there was minimal forces that day. Il-prepared, obvious with orders to let them rampage the Capitol building, things were ripe for an embarrassing time for the United States.

The key point or take away here is a new level of tactics by the Democrats. They are now going to infiltrate every Republic meeting, rally, and event and have bad actors like Antifa or BLM to do something to cause infamy.

Some pertinent points about the Capitol Building Breech in January 6th.

Without this in place (riot barricades), Trump supporters breached the barriers leading into the building with the apparent acquiescence of the police. In fact, officers seemed to offer little to no resistance to the assault and the breach in the initial stages. And some officers were even seen seemingly posing for selfies with the rioters. (theconversation.com)

To many policing experts this was nothing short of an international embarrassment for American law enforcement and a searing indictment of a police department that appeared to be caught completely unprepared. As Charles Ramsey, a former D.C. police chief, told The New York Times: “How they were not ready for this today, I have no idea. They were overwhelmed, they did not have the resources. You have to be able to protect the Capitol. That is not OK.” (theconversation.com)

There was no way they couldn’t see this coming. As early as mid-December, with tensions high as he ramped up his baseless and un-democratic challenge to the presidential election results, Donald Trump was urging his supporters to converge on Washington for what he promised would be a “wild” demonstration against the certification of Joe Biden’s win. How, given how obvious the threat was and all the warnings they received, could law enforcement have wound up being so woefully ill-prepared and ineffectual as that protest became a violent revolt and pro-Trump insurgents took the Capitol by force? (vanityfair.com)

The force lacked strategy, contingency plans, and reinforcements to defend lawmakers. Leaders rejected offers to help, including from the FBI and Pentagon before the attack, according to the Associated Press… The Defense Department reportedly hamstrung the National Guard and was maddeningly slow to accept an offer from Maryland Governor Larry Hogan to send in reinforcements from his state. Meanwhile, the FBI brushed aside warnings from Senator Mark Warner ahead of the attack, assuring him they were prepared. (vanityfair.com)

But just based on what we know, it’s something of a miracle that this nightmare wasn’t even more catastrophic. Pipe bombs were found at the Democratic National Committee and Republican National Committee offices. One insurrectionist, who was arrested and charged, was caught with 11 molotov cocktails “ready to go” at the Capitol. Others were caught with flex-cuffs, suggesting they may have planned on taking hostages. Reuters’ Jim Bourg recounted hearing “at least 3 different rioters at the Capitol say that they hoped to find Vice President Mike Pence and execute him by hanging from a Capitol Hill tree as a traitor.” (vanityfair.com)

But what is the lesson to be learned from it all? Obviously, Democrats want Trump supporters and anybody except them to not march, and not express their anger. That is the lesson we are to learn. Yet we compare how forceful the Democrats stopped the riots of 2020, the CHAZ, and other similar public acts of aggression, they did nothing. The very people getting arrested we released and back at it within the same day. In New York City it is worse. Criminals are back on the streets the same day even after they are arrested breaking the law. So the last people to criticize are the Democrats. They are methodically destroying our country, and the rule of law. Instead of the Constitution rule of law, they are the law, and their whims and dictates are our laws now. Obey or suffer.