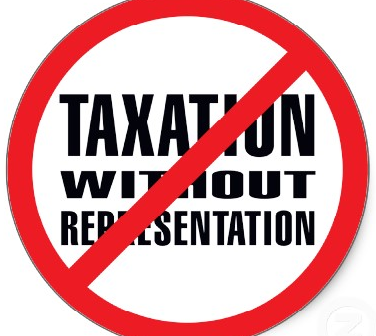 Taxation Liberty and Justice for All is an opinion piece about the problem and unfairness of taxing higher rates for the rich, which ignores the real problems.

So we hear a lot these days about taxing the rich as the solution to all our problems. But that is not really the solution and I am not rich. There are real problems out there, and this “solution” is just another red herring, or distraction from the root problem.

First, what will happen if we tax the rich so much as to choke them to death? Very simply, these are the people who are controlling our businesses and services. They pass the extra onto the common man. So everybody gets the effect of higher everything with a little bit of time.

Second, why tax the rich at all in the first place? Are they enemies of the state now? No. The American system is built on the principle that “the system” is fair and just for everybody. What advantages or helps or opportunities one person or business can muster must be equally available to everybody. This is not the system we have. The “help” that the federal government gives is directed at the poor, and not the medium or upper classes. Is this fair?

To level the playing field is a concept that makes “the system” respect and allow everybody to equally play ball. The Constitution is supposed to defend everybody’s right to be equal. Yes, a big corporation with a billion dollars in capitol is going to have an advantage that the small guy cannot have, but under the concepts of the Constitution, they are equal, and to the extend that each claims their opportunities they should compete as best that they can do.

In times past, the federal government came in to break up monopolies so that everybody can play in the same way as the big guys do. This is in the spirit of the Constitution. But what we see today is not.

Our modern Federal Government (state and city governments are following also) is doing is deciding to favor one group over another, and penalizing one group over another. Instead of penalizing crime, they are just deciding according to their own desires whom to lift up and whom to put down. These decisions are not voted on by the American public nor are they indicated in the Constitution. The motivating element in them is how those receiving the benefit will vote for the lawmakers political party. This is destroying our country.

People who are not balanced and do not have any concept of fairness nor morality are deciding who is an enemy and who is a friend to be benefited. The bottom line in their thinking is how any action by the government can be brought to a profit back to themselves.

Fair is the principle of lady justice sitting in judgment with her eyes blindfolded. Whatever the decree is, it is the same for everybody. In all the calls for our government to help one group or another, the people wanting things are not understanding the real needs of other people, nor do they admit to what was the origin cause of their problem, like homelessness in California. (California has been under total Democrat control for 50+ years now and their idea of utopia is sleeping on the street? They had everything they could ask for, but it has never fixed the problem only made it worse.)

Fair is equality. In other words, what is done to one person is also done to another. Evil actions are not to be done to anybody. Help, or government assistance, should be given to everybody regardless of race, political party, age, or sex. The liberals have inserted the gay agenda into this, saying that those who are gay need to be defended. This is not right. Are those who decide to remain single, or those who decide to marry somebody of the opposite sex afforded the same amount of energy, money, resources, etc as what is being given to the gay community? So this is not equality, but using government to impose benefits and defenses on a people that are not afforded to other communities. If a person wants to be gay, let that be their decision. But do not force their lifestyle on me.

Fair is treating everybody the same, with the same benefits as any other person would get, especially if they are in a special group. So why is government helping poor people, sick people, and other such special interest groups?

Any here is where we get into a nitty gritty issue. The government is spending our tax dollars to do charity work. Why don’t they leave that to the religious groups since that is exactly within their scope of activities and what they want to do in most cases? But this is where our modern government has gone very wrong. They presume to take control of what is not in their jurisdiction to do so. Does not the Constitution prohibit government from interfering, restricting or promoting any specific religion? The general Judaeo-Christianity moral framework is understood in the Constitution and founding of the country, but government should not endorse religions.

When government taxes people, the taxed have no recourse. What if a citizen does not want his tax money to go for abortions, or to pay rent and a monthly gift of money to an illegal (or legal for that matter) alien? What recourse does he have? But if a citizen wants to help say the Afghans coming into the US, there are charities that are helping them and that person can give what they want without the US government getting involved. That is just and fair.

Forcing all citizens to pay for unwanted things is wrong

Our present day case of Covid is exactly the point. Over the years, the United States has become the big rich papa with deep pockets giving away candy to everybody in the world. Not all citizens were agreed on this when it was pushed through Congress (many complained and voted against these programs and bills). But we have inherited these things, and we are paying for them, and our children are going to pay for what has already been spent for generations to come.

Again, if somebody really feels moved to support something like AIDS, they are free to do so. Why does the US Congress feel it is fair or right or justice to make people who are not gays, who are not interested in protecting what they think is a sin, pay for this research?

So when America is being blessed (like under President Trump), there is a possibility that some citizens would consider helping the homeless in California, or the asylum seekers (only 10%). But when our own citizens are out of work, and we have gone through a year plus of no work, limited work, sickness, why are we spending our tax dollars to schools in Pakistan for any reason? Our country´s foreign aid spending needs to be greatly overhauled especially in these days.

If Joe Biden and the Democrat party are so hell bent on giving away money to people, what happened to helping the common joe American suffering under Covid? Did you notice that Trump wanted to give $2000 per adult citizen? The Democrats fought tooth and nail AGAINST THAT. They reduced it to $1400, and then when Biden went into office, they finally agreed to give the other $600 that Trump had wanted in the middle of last year.

So let’s compare. Trump’s desire was $2000 per adult. How much had Biden fought for that Congress gives to every American adult citizen? $0, zero. The Democrats have change the “need” from every citizen to now parents of children (giving all adult citizens would get money to these same children correct?), they have given money to bail out Democrat states and cities that are greatly in debt from mismanagement. (Note that the Congress passed a law in the past prohibiting federal monies from going to pay abortions and giving aid to illegal aliens. California gave federal money to illegals. Now they are in debt over their heads. Why should the rest of the US bail them out, and allow them to get back in debt for the same thing?)

So you see a pattern forming. Democrats don’t want to help anybody except themselves. They cause problems so that they can fix them later on, and in the process cut a large part of that aid money for their favorite causes (Democrat donor groups), and keep themselves in power.

What is fair as far as taxing people?

One of the founding principles or elements in our country is “no taxation without representation.” In other words, what the people pay in taxes, they also need to have a say in whether, what, how, when, and how much is spent. This principle was one of the problems that caused the colonies to break with Great Britain. So if you ask the general run of the mill American, how important is saving the snail darter in the Tennessee Valley to you? Most if not all will say nothing. So why are millions of dollars going to that? Very simply, those who live there and get that money, and the universities who receive grants to study the issue are the only ones who are for the government spending money on that.

Let’s put this another way. Ask, how much money of your taxes should go to the Wuhan virus laboratory to study how to make bat viruses jump onto humans and infect and kill them? I would like to see an honest poll results of that one.

The Crux of the Problem

So we get to the crux of the problem. We consider honestly taxation, liberty and justice for all. Our government officials are spending other people’s money on insane and stupid projects in order to keep themselves in power. This is a problem. This is THE problem. In order to get a bill passed in Congress, you have to have a majority to vote for it. So a defense bill, a bill to pay the government to keep the lights on, etc. All of these bills that are passed have to have votes for it, and the low life politicians simply ask for perks for their district in order to vote yes. They do not do their duty of examining the bill and pushing for what is best for the United States, for all Americans, they are interested in their staying in power next election cycle.

So this beast has two sides. One side is what the government spends, and the other side is where the government gets the money to do what they do. We greatly lack real statesmen in politics that are looking out for the good of the whole country, not just their constituency.

Taxation Liberty and Justice for All