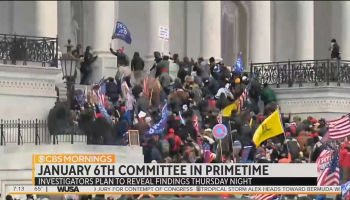 January 6 Committee: Clown show is a total clown show and it is an embarrassment to our country, our laws and Constitution, and the order of our American society as it should be.

This post are my reactions and thoughts from the following Breitbart.com article:

I will arrange my comments along the points of the article.

Very simply we now have a two tier justice system, with everything and anything that the Democrats do to break the law is overlooked, and the safeguard laws to protect citizens with due process are denied to the conservatives and Republicans. The only solution to this is to obey existing laws, and punish from the politicians to the government employees down to actual actors in breaking the law. Why is this not being done? Because back through recent history, certain figures have violated the law and the justice department has done nothing about it except look the other way. For example, Hillary Clinton had an illegal server in her bathroom, and nothing was done about it. No investigation, no charges although it is very apparent that there should have been.

Now we have the overturning of Roe and the left demands the right to riots and deliberately break the law (on abortion). Supposedly, they are breaking the overturning of Roe, but the Supreme Court is only breaking the liberty of performing abortions nation wide, and turning the decision to yes or no on abortion to the individual states. So they are not necessarily breaking their state’s law by doing anything. It is just a gesture that is actually hollow.

But the point is well taken here that we observe, the left can get away with any law breaking and the right cannot even peacefully protest any more. There is a double standard now in place.

The fact matter in the January 6 protests is that they were not riots, and those protesting did not do so as a riot. They wanted to make their voice heard. In the past, Democrats have been very fond and protective of the American right to make their voice heard, but as they have taken control of the reins of rule of the US, they now are clamping down on those rights.

3. No equal treatment of Democrat doubters.

In most US elections in the past there were people who didn’t like the election results. They would file papers for recounts, claim fraud, etc. These are lawful actions under our government. Doing such things follow a process under which a judge evaluates the claims and gives a verdict according to the laws of elections.

So in every election where a Republican won and the Democrats protested legally, that was and is okay. But if a Conservative or Republican does the same, he is somehow breaking the law.

When people lie under oath, they need to be punished as the law stipulates. Courts and court cases are decided by the validity of the evidence presented, and to accept as valid lies destroys our judicial system.

We are slowly getting to the point where if you disagree with Nancy Pelosi or Chuck Shummer, you may find yourself doing time with no further reason needed.

So you chose by your voting which of these two positions you support by voting Democrat or Republican.

7. Violation of the separation of powers.

The president of the United States as dog catcher. Our founding fathers established different tasks for different elected people and different structural groups. The broad three are the Presidential (that enforces the laws made by Congress), the Congress which authorizes funds and makes the laws, and the Judicial system (which decides when the other two powers cross the line of what is given to them to do or acts out of bounds of the system or against the Constitution). When one power takes over another powers tasks, then the system is out of wack. That is what we are experiencing now.

The liberties that the Constitution recognizes that God gives to every person are being destroyed in own day. The only “right” left to us is to suffer at the hands of the modern dictators who are running our system. Their pleasures are our law.

Since when are we as a country against oil based energy? Nobody voted on that one. The Democrats (and even among them, only the most radical of them) have decided this for us. Joe Biden is destroying the hydrocarbon energy system in the US, and it is against the good and the will of the common American citizen. The citizenry in general all have gas or diesel based vehicles are against electric vehicles. But we do not have the freedom to exercise our own wills anymore. Things are being forced on us unwillingly.

9. Persecution of the opposition.

The Democrats are waging war against those of their opposition. There is no longer any honor of your fellow American and even though you don’t see “eye to eye” with him, he cannot exist.

The January 6 investigation and trial is a joke. First of all, the House does not have the authority to conduct a trial on a supposed insurrection. It is out of bounds for them. Moreover, it is not a trial as it should be, and the rights of the witnesses and accused are not respected.

In the raiding of Trump’s home, we see that the Democrat’s opponents, they have no basic rights. If it is not a direct attack, then there is just hassling the opponent. The laws of America should defend a person’s God given rights, but when you have dictators that do not believe in a true God, but rather that they are taking God’s place, then you see what we have.

They are conducting in secret which is another breech of American law, and moreover, they are using the proceedings to persecute their political opponents.

My observation is that if you want the America as our founding fathers wanted it, free, then you must vote out and oppose all Democrats.

The greatest problem in all of this is that swinging the pendulum back we will go too far on the conservative side and persecute the Democrats. They protection as citizens must not be infringed although their unlawful tactics  need to be stopped.