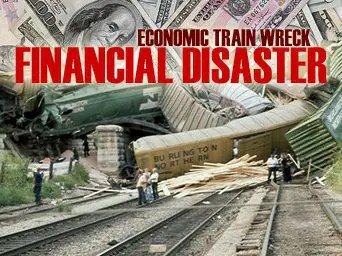 Biden’s Train Wreck on the Economy is an analysis of several points of Biden’s acts and the economy (and also the motor for inflation).

Report: Americans Are SKIPPING MEALS Due To Skyrocketing Grocery Costs

Let’s just put this very frankly, Joe Biden has “driven” the United States economy into the ground. He has a train wreck on his hands. Because of his mindset and perspectives, there is no hope for him.

Democrats have a distinctive view of things that causes their actions to be what they are. I won’t go into detail here, but generally, they think big government and government intervention is the solution to everything. The condition on this view is that it will work ONLY WHEN THE DEMOCRATS ARE IN OFFICE. They purpose the opposite as also true. Anytime the Republicans are involved, and horrors of horrors, if the Republicans are in control, everything that they do will “destroy our country”. Reality contradicts this line because when Trump was in office, the economy was roaring and great. The lie that they said was that all that good economy was belated effects from Obama’s policies. Wait a minute. That is not how it works. If you theories and policies are what fixes things, then within a few months to a year or so, we should see it take effect. That is how it works when Republicans take control. Democrats fall on their faces with the economy, and they curse the Republican before them. Obama had 8 years to straighten out the economy, and he couldn’t do it. Trump had a short 4 years, and the Democrats caused every hindrance they could to anything Trump did in those four years, and even so, the economy was great under Trump.

The problem is that Democrats live in a fantasy land of their own wishing. Their thoughts and beliefs have nothing to do with reality. They take whatever good the Republicans have done and trash it. Case in point, Biden entered office with the official policy of just “doing the opposite of Donald Trump, whatever Trump did, I will undo.” This is no policy, this is pure hatred and evil. What can come from this position other than bad things for everything?

The article I mentioned above mentions that a number of Americans are skipping meals in order to make ends meet. Really? In America? We had never seen this kind of thing since the Great Depression. What is causing this? Democrat policies of destroying America. That is what.

Inflation is killing us

The article also talks about inflation, and the assertion that even the bad numbers we are now seeing (from official Democrat spokesmen) are not even really what the inflation is. People are feeling this inflation as being much more than any 8%. Probably between 40% to more than 100% annual inflation is closer to reality.

But it takes a Joe Biden to really screw up the economy. What Biden has done is to attack our country at many levels, with his henchmen also destroying various parts of the economy. What Biden enters to “fix” blows up in his face. A normal person would just not touch anything. But a Biden will constantly go back for more. His whole purpose (deep down in his heart) is to see just how bad he can cause the country to fall into problems. The Democrats are always talking about the great “reset”, so they want a crisis of such great proportions that the entire government will have to be overhauled, and when that happens, they will have their spoons in the pot to get even stronger positions of power, and more kickbacks for them.

Biden chose a homosexual as transportation secretary. People who don’t even know how they are to be as far as their sexuality have a perverted and blurry world view, so they are not going to do well in governing. Buttigieg is not even showing up at the crisis points in transportation. He is visiting a new gay bar instead. This reminds us of Kamala, the immigration czar, that won’t even visit the border nor engage with the issues and problem of immigration. All of these Democrat “experts” are actually horrible at the jobs that they are supposed to be doing.

But California has imposed state laws to keep non-California truckers out. So the containers continue to pile up in California, and there lies a bottleneck that is causing a pipeline issue. Goods are not coming into nor going out of America because of their foolishness and dictator governing. Biden and Buttigieg went together to “solve” the train unions problems. (Maybe wherever that was being held, there must have been another gay event and that is the only reason Buttigieg showed up.) That union deal is all falling apart now. So the trains will stop. This is of course PRESUMING that if it were ever to be fixed, they would have diesel to move the trains, which is doubtful.

But the more you look at transportation issues, they are just one crisis after another that are piling up. These crises are what Biden has to claim as the notable accomplishments of his presidency. Really, from what we see from the Democrats, why would any sane person ever let them into government again? They muck up everything they touch.

It is beyond belief that Yellen is surprised at the inflation we are experiencing. In other words, she does not understand what causes inflation? Moreover if she doesn’t understand the under the surface factors that cause or relieve inflation, she hasn’t a hope of a chance of fixing what is wrong. So goes Biden’s cabinet experts. You can hang this on Yellen, but also on Biden. Jimmy Carter, another crazy democrat from years back, likewise thought his actions would fix the inflation problem. No. It took Ronald Reagan’s trickle down to fix it.

If repeatedly time after time you see Republicans fixing things so that everybody is blessed, and Democrats repeatedly every time destroying anything good in our country, how will you vote in the future?

More Articles on Recession and the Economy

Biden’s Train Wreck on the Economy