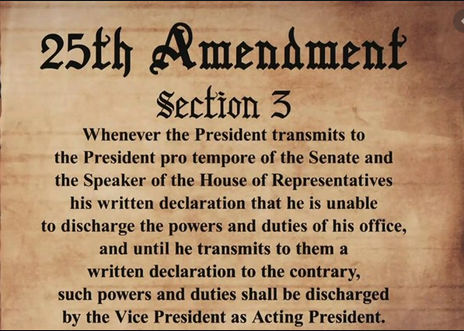 The 25th Amendment was made to make a direct replacement of the acting President of the United States when for a medical reason, such as surgery, he is unconscious. The medical reason was never for “being crazy.”

In time past, factions have tried to remove a President they disagreed with by getting some Psychologist to declare him off balance or crazy. The Congress made an agreement with the Psychologists association that no verdict of off balance or crazy can be given to an individual without that individual first allowing an extensive psychological interview with the patient. Only after that, can that give an evaluation. They did this in order to rule out “arm chair psychologists” from trying to exert pressure to destitute a sitting politician simply because they think he is crazy because he doesn’t agree with their views.

Mr. Jipping’s article is an excellent review of these facts (about the 25th Amendment).

The 25th Amendment makes it clear that the President himself must give to certain people in Congress a permission for the Vice President to take over his responsibilities, and this is always a temporary situation until he can fulfill his duties against. It is not an altogether removal function.