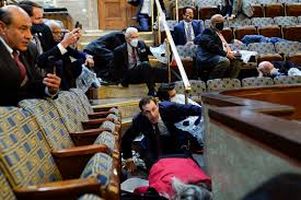 Capitol Breech was a setup by Democrats is an examination of the breech of the Capitol, how it was a Democrat setup.

Capitol Breech was a setup by Democrats

But the reports are confusing.

While the Democrat version of this is that this event was so severely wrong, it compares to the 911 attack on the US. more than 3000 people died in that attack, and how many died on Jan 6? Just 1. A Trump supporter. A capitol policeman died the next day of unrelated causes.

Yet, the Democrat attorney general of DC still has participants in jail without hope of bond several months later.

Why? Are the Democrats trying to punish and instill fear in Trump supporters and Republicans to not come out to rallies? It sure looks that way.

Capitol Breech was a setup by Democrats: What did they do wrong?

If the reports that the DC Capitol Police opened the doors and invited/allowed them to come into the building, what harm did they do? That is the issue. They did nothing wrong. The building is open to visitors frequently if not daily, and these tours are acceptable and desired. What is the foul in these people entering a building that they as taxpayers pay to have it run?

To the thinking person, it would appear that the Democrats were fearful that a mass of Trump supporters would plant themselves outside the Congress and the White House contesting the election results. They could not have this, so the January 6 incident was invented and spun so that the National Guard was there to deter any protestors and this went on for months after the transition to team Biden. While the breech was positioned and spun to embarrass Trump and the Republicans, it had a self defense motive of making the National Guard units around the Biden White House “reasonable”.

Additionally, the Democrats spun it as the worst assault on the nation’s ruling structures ever. This again is a lie, and it is meant to suppress the Republican response to the fraudulent election of 2020.

Blaming others for what you yourself are doing

But actually, the Democrat rouses that they are using is very easily seen through.

Riots of the Summer of 2020 versus January 6 Capitol Breech

Truthfully, the Democrats are destroying our country. Over the summer of 2020, the Democrats through their proxies in Antifa and Black Lives Matter movements have created chaos in our country. Private and public property has been destroyed by these riots numbering into the billions of dollars in loss. Yet instead of denouncing this and putting a stop to this, the Democrat party has been totally silent. Their Democratic governors and other lower politicians simply restrict their police from doing anything to stop it. They refused federal help that President Trump was offering.

The importance of their actions deserves to be understood and meditated upon. IN A DEMOCRAT STATE, CITY OR LOCALITY, the Democrat party would rather see the businesses of all of the people in these areas suffer just to try to negate any victorious actions by Donald Trump. Being crazy is when reality is distorted in a person´s mind, and very often either the person is being persecuted (not really, just in their minds) or they have to get somebody that they hate. Envy, jealousy, and hatred are the elements that take over a demented person’s mind. Hitler hated the Jews. We can identify this element in his mindset and actions. What is so different between Pelosi and Shummer’s hatred of Trump and Hitler?

In reality, the actions of the Democrats follow this perfectly. The Russia collusion hoax that just could not generate any evidence. In dealing with politicians and the rich business people of our world, which ones are hard to find that kind of evidence of invalid business practices or political back room dealings? How would Bill and Hillary Clinton stand after investigations like they did to Trump (for 4 years and counting)? They wouldn’t stand well. We know how obvious the evidence is and yet no investigations of them.

Conclusion of Capitol Breech was a setup by Democrats

So the entire January 6 scandal was not orchestrated by Donald Trump. He tried to prevent anything of the sort by offering National Guard troops and other police, FBI, etc. Pelosi refused him and threatened him if they intervened. She knew what she was going to do.