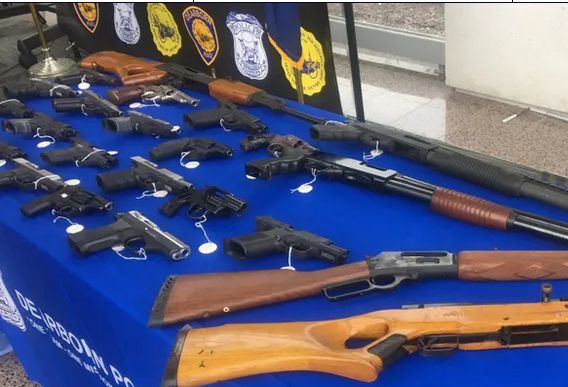 Facts about deaths by Guns in the  U.S.

The Second Amendment to the Constitution

A well regulated militia, being necessary to the security of a free state, the right of the people to keep and bear arms, shall not be infringed.

Self-defense is a God given and God mandated order. Self-defense is not something that neither the Democrats nor the US Constitution (i.e. the US Government) concedes to its citizens. Rather it is something given to everybody by God. As a husband, there is an obligation for every man to protect his wife and family. As a parent equally their children. This obligation is recognized in the US Constitution as a God ordained duty for everybody.

So the fulfillment of this God given duty is to own and know how to use a firearm. The US Constitution, Second Amendment is simply recognizing and making completely legal the ownership of a firearm. In reality, a firearm in a steel container box at home does you no good when somebody is trying to rob you, rape your family females, nor steal from you on the street. Neither does keeping that firearm in your car and its ammo in the trunk.

Yes, many criminals would want a loaded gun in the front seat with them to use against law enforcement, so we accept that limitation, but having a weapon should not be an issue we are trying to do away with.

Democrats grudgingly concede that firearms are okay for hunting and for ex-military/active-military. But let’s understand that those are people who understand firearms and who should be first in line about any law about any firearm. But they are not what the Constitution had in mind when they penned the second Amendment.

There is a very dangerous Democrat thinking in this point. They do not see the US founding Constitution as a good and right set of rules, laws, and principles that we should live under these and within the bounds of what they set out. Democrats want to eliminate the Second Amendment. Why? Because their take on firearms and all involved with them (crime) is better in their own perception than the founding fathers. So we question, if they are so brilliant, why don’t they leave the US and go to some island somewhere and create their utopia with their crooked ideas? Because they want to destroy the United States of America, because they have a deep hatred for it. For all their mouthing about how this is “their country” and they “love America”, well actions speak louder than false praise every time.

People kill People, and they use Guns or anything else they can find

It is kind of hysterical (if not so sad) that in England, they have taken away the ownership of firearms, and now knife stabbing and vehicular homicide are now replacing what people once did with firearms.

But there is a principle at play here, no gun kills people without a real live person behind that trigger. We do not take a pistol that killed somebody and put the pistol in prison, but the person who pulled the trigger. That principle behind this is that the person who misuses or deliberately uses any kind of weapon or things not considered normally as a weapon, e.g. a car, to kill or harm somebody else in a physical way, that PERSON is tried and sent to prison if proven guilty.

So let’s examine this a little bit more. Democrats are very against any kind of firearm, and from their perspective. Yet in all the states (like California and New York) and the large cities where Democrats have held control of those governments, there is a parallel, more gun restrictions than other Republican held states and cities, and more gun violence. So the bottom line is very simply, Democrats don’t know what they are doing. They are making a lot of laws, and their problem that they are trying to solve (gun violence and general crime) is getting worse by the day. The obvious point here is that the United States population should energetically prevent all Democrat laws and legislation away from becoming law. They cause the problem to get worse and ruin the principles that keep people safe.

A simple thought here. What would your normal criminal prefer. 1) Citizens having an impossible time trying to buy firearms and ammunition, along with locking up any firearms they may get in a steel gun case, or 2) citizens armed and having hidden carry permits for their arms? The first is what they prefer.

Another thought here, is that criminals will always get their guns no matter what laws are in place. They are accustomed to breaking the law, so no law will stop them. But when the law limits citizens to not having or not carrying their firearms, and making any gun limited to a few half dozen bullets, these criminal get machine guns, AK47s and such, and the fight gets nasty. In Mexico, the Narcos use military grade weapons. Do the Democrat government officials stop the US from providing these? Not really. Under Obama, the US government sold weapons to the drug cartels. So whatever their reasoning was, the reality and outcome was horrible. Democrats are not against all weapons, because they are allowing these weapons to go to criminals, and their own bodyguards.

So this is very hypocritical that they want to take the moral high ground when they are obviously not practicing what they are wanting the rest of the citizenry to practice. (See Kamala packing heat) Why does a Democrat politician that advocates gun control, or total abstention if possible have armed guards around them? Why don’t they simply do without? Because they are the elites, and they “need” armed protection, but the common citizen does not. He can call the police if he has problems. Wait, no, they want to defund the police, and do away with bail, so the very same criminal if he is caught somehow by low staffed police departments, that criminal will be back at your door with his gun in some cases (NY) the very same day. Huh. Food for thought. You ever get the idea that while they preach no guns, that they have a small arsenal in their own houses?

As I have noted above, Democrats are the biggest hypocrites around. When you look at the whole of the situation, you quickly note the general drift of the Democrats. They want the crooks back on the street, out without any restrictions, and they want to eliminate the pressure of the law, especially incarceration, in dealing with criminals.

Then they want to give criminals the right to vote. There is a reason why that is not good. Criminals will influence the law to their benefit if they are allowed to vote and have a say. It is interesting to me that black men under the law have been very heavily pounded on by the law, justice system, and police. I didn’t come up with that, but under Trump that was observed. Trump signed laws giving reprieves to what was a hard system against black men. They were treated more like white men than a specially hard group.

The Democrats enacted the laws over their years in power against these black men who crossed the law. Trump equalized what was done against blacks with what was done with whites. So are Democrats against criminals yes if they are black, but in general no. It is beyond me why black people vote for these Democrats.

The bottom line here is what works, practicality.

So what does work and what doesn’t work? California, Chicago and New York all have big gun crime problems. But they also have the strictest gun laws on the books. Does that work? No. Republican cities and states tend to have liberal gun laws with no or little restrictions. Yet their laws that allow citizens to carry guns, hidden or open carry laws, tend to reduce crime in those places, i.e. that works. So why are we following a failed system when a working, good working system is available?

Database of citizens defending themselves against Criminals

The Democrat party typically over the years tends to be very intensive in making laws and restricting people in general. They are power hungry and that appears when they take away people’s rights, dealing with anything. Their general working plan is that they are the country’s mamas and papas, telling everybody what they can and cannot do, and restricting everybody as much as they can get away with. Just take a peak at California, and you will see obsessive law-making.

Maybe in some cases this is necessary, but in everything?

So if compare the Democrat practice and position on crime, they present to us that it is an end of the world problem if we have citizens running around the country with firearms, yet in the same breathe, they did not discourage the rioting and violence (crime) in the summer of 2020. Why didn’t they come out and condemn all of what was going on? A one word answer here, Trump. They wanted to cause Trump problems at any cost, and so they did not condemn much less restrict any violence going on in these riots. If they really were concerned about crime, why don’t they fight against it?

The January 6th events are highly suspicious. It is very probably that the Democrats had their had in those events by 1) ignoring intelligence reports about the situation beforehand. 2) promoting or ordering the Antifa and BLM groups to infiltrate and lead the group. 3) promoting what happened to spin it to be something other than it was.

But the point is that they are not at all against violence and crime (as they would seem to be when talking about gun control and gun violence) because that preoccupation in the gun control issue is not seen in the rioting, the BLM, and Antifa problems. So why the disparity? Because they are hypocrites that use violence for their own purposes and could care less about the real crime issues.