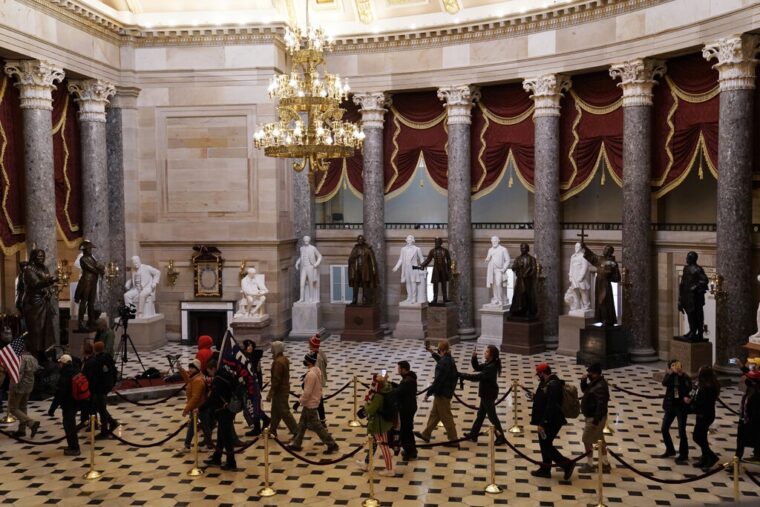 The truth of the matter is that no matter who says something about the events of January 6, the only opinions that count really are what a judge might say before handing down a sentence. Even that seems to be highly twisted.

They were not rioters but “tourists”

If you compare the summer of 2020 with all the riots, they killed people. Their point and the essence of their “riot” was to first occupy, then destroy, and then hurt people, usually innocent people. Nobody died in the January 6 even except those by the hands of Capitol Police and one policeman that had a heart attack unrelated to the events of the day. It was the next day.

But the most obvious point is that it was a Trump rally which is completely legal. The Democrats are crying because Trump can have an impromptu rally of even boats and thousands show up. In his rallies, he had large centers where they were held into the tens of thousands, and then there was the overflow crowd. After the first few that these large centers couldn’t contain the crowds, people started forming a day or two in advance, sitting, sleeping, standing in snow and freezing weather to get into the building to actually see Trump.

Joe Biden’s rallies were at best a few news reporters, his own staff, and a half dozen people. There is no base for Joe Biden. Everything was ginned up, fake, imaginary. The Democrats push their people to come to his rallies and even so, they couldn’t get people excited about an old white man with no message, no plan, nothing but the same old garbage that the Democratic party has been forcing on America for years now. I do not like their positions way back when they had something to speak of. But today, it is hard to criticize them because they have no plans, except “being dictators” if you can count that as a plan.

President Trump’s plans worked. He was a businessman, a successful one at that, and he had studied, working, well working plans. Biden’s working plan is to undo everything Trump did. That is not very far sighted. First of all, because Trump’s plans work, and from that point of having the southern border immigration under control to undoing it with no other plan in sight, is just lunacy. Welcome to the crazies in power.

So this is their plan. Be careful because if you blink you will miss it, and they won’t have another plan for a while. They are not that bright. They use a Trump rally in the Capitol, and then insert Antifa people with Trump T-shirts and hats into that, that they go into the Capitol building. The Capitol Police are in on this and open the doors and invite them into the building. With that single point, anything bad that happens should be hung on the Capitol Police as being responsible.

Then some of those Antifa plants do something to make a scandal, and one of them toted off something from Nancy Pelosi’s office. All the Democrats in their building doing business are scared to death and hid under tables, desks, and chairs, shivering in fear. Some have to have Psychological counseling from the horrible event.

Compare this to the Benghazi breech. Your conclusion is that the-run-of-the-mill Democrat is just a big coward. They are shivering behind other people (the Secret Service, the Capitol Police, the National Guard, the US Soldiers) using them as disposable human shields. Why didn’t Nancy try to reason with these people that day? Where is all of her bravery? It got lost real quick because the Capitol Breech was a setup. It doesn’t take a rocket scientist to discern that.

Aftermath of the Embarrassment to the Democrat Congressional People

Ok, so if it was a breech, and those people meant harm to Nancy and company, who over the last 5 years or so does that as a common element in their political maneuvering? Occupy Wallstreet, occupy movement in general in Portland et al, Antifa an arm of the Democratic party (their Nazi brownshirts). So this is the working plan of Democrats now Republicans.

So I guess it is plausible that the Republicans would use the Democrat tactics. But what was accomplished? Did the rioters “occupy the Capitol” for any length of time? I mean really, little damage was done compared to the Democrat summer of riots, so what?

Actually, if the Republicans were planning something like this, they would not do it this way. I was fully expecting that Trump followers would go out in front of the White House, camp out, and protest with signs and cheering. That is what would normally be the plan in times past. But interesting, Nancy’s overreaction to her own Antifa leaders in the Capitol breech let her implement strict barriers keeping any protesters from coming near Joe Biden. Maybe she was afraid he wouldn’t go to beddy time at 8PM, or that it would disturb his sleepy time. I don’t know. But really, the savage raging against Trump for the last 5 years in comparison to the cushy treatment of Joe Biden is just not right.

Returning to the Capitol breech, NOBODY BELIEVES THE DEMOCRATS INTERPRETATION OF THIS! Really Nancy, get better script writers or something because this is hokey from the beginning. And let those moms and pops, grandmas and grandpas out of prison. They didn’t do anything wrong. The Capitol Police invited them into the building, so put the police in jail and charge them!

Nobody believes you Nancy! Are you listening!