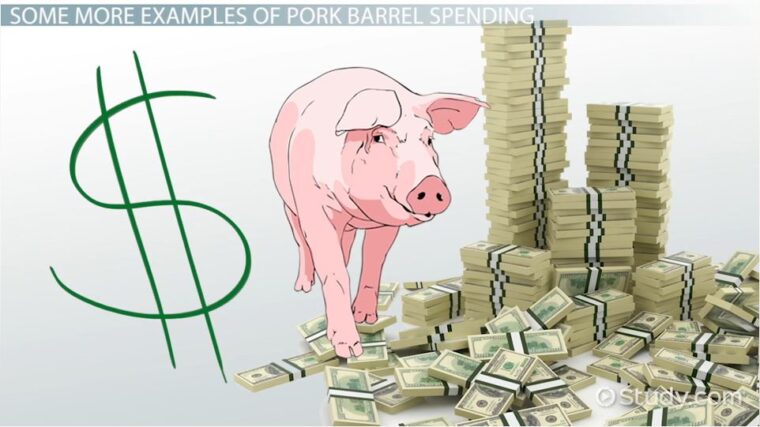 Pork Barrel Spending of the Swamp in this I examine how unscrupulous politicians pad their own wallets with taxpayer money.

Let’s start off by saying that politicians as a whole are well paid. Maybe they are not making what some billions make, but really, all they do all the time is talk and enough the good life. Very few politicians actually do investigations or study issues, they have staff that does all of that. And while we are talking about their staff, each politician basically from lowly town officials all the way up to the President all have their own security forces. While some politicians are calling for “defunding the police”, these same politicians have extensive taxpayer paid security. These security personnel are almost always armed.

It grows to ridiculous that the presidential limousine is designed to withstand a nuclear attack. How many private citizens have something like that? How many are actually interested in spending the money for something like that? But politicians have such things, and guess what, they don’t pay for it. The American taxpayer pays for it. So these are people who live a life of luxury at taxpayers expense.

But the focus of this post is what a group called “the swamp” does to gift itself of taxpayer money. When you are making laws and governing, why not make a law that greatly benefits your own self? Even better, give money away to your cronies. To you financial donors. That is the way Washington has become, and it is called the swamp.

The most recent manifestations and distortions of this is making a law for some noble cause where a chunk of the money allotted or a large portion of it goes into pork barrel spending. Pork barrel spending is when there are a lot of people getting benefits from a bill that are 1) not the stated destination of that bill, and 2) hidden beneficiaries of the bill. Everybody seems to get into the pork barrel and get a cut of the money.

The problem that Biden presents us is the burden of student debt. Students go to college and have to pay for it. Wow! It is like a family of 10 going to Disney, and then the father complains that it costs a lot. Duh? If you didn’t anticipate that it was cost a lot of money you shouldn’t have decided to do it. Now there is a growing problem with student loans. The problem is that students don’t want to pay these loans off.

Then there is the issue that the government has no money. The government does not have any kind of income from its existence. It is only spend, spend, and more spending. The government charges taxes from their citizens, and that is the only source of income that they have to spend from.

So to get this straight, many people never go to college, and very, very few actually go to graduate school. So when we analyze this, the taxpayer without college is paying by force from our government for careers that these people have 1) received Pell grants for most of it, and 2) took out student loans so that they can live well while they are in college. Working while in college never enters these people’s minds. But they want the government (via the Democrats and Biden) to force joe ordinary taxpayer to foot the bill again for this.

Like I said before, there is a specific mentality that goes along with this conduct. The most common students who are pushing for this are student from Democrats, and many from rich Democrats, and Joe Biden’s student loan relief will benefit mostly DEMOCRAT STUDENTS. They come from wealth families that also are Democrats. So this is insult on top of insult here. Why? This is not voluntary, it has the force of law behind it. The government will tax those who are not part of this, and these taxpayers have to pay for the luxuries of Democrats and liberals. Why?

Taxpayers who follow more conservative spending practices, 1) save for their kids college, 2) sacrifice by working a second job, or husband AND wife both have jobs to pay for it, or one or both take on second jobs. Many of these people that “pay their own way” and “are not wanting to be a burden on the country,” will skip vacations, not buy second homes, not buy travel RVs, etc. in order to cover their expenses. Why are these people penalized with increased taxes for the luxuries of a few Democrats? Either that or they want to add these expenses to the national debt so that their descendants down two, three or even four generations away will still be paying for it, and all the interest fees for it over hundreds of years.

If you read the article I cited above, they asked the people most probably receiving the benefit from this bail out that if they get that money, what would they do with it. Spend it on paying down their legitimate debt? No. They will fritter it away in vacations, in luxury spending, in partying, etc. No way.

The politicians whose governing runs in this kind of thing, the swamp, needs to be voted out of office. I would say that the Democrats are these people, and I would be correct. But unfortunately, there are Republicans that are just like them. Pork barrel is a “good ole time” where everybody gets the good stuff. This needs to stop. Taxpaying citizens need to make it stop. Politicians that are caught doing this kind of thing need to be kicked out of politics as soon as possible. The threat of doing something like irresponsible spending needs to be so great that other politicians will fear the blow back from this.

If you carefully analyze this, it is a scam to begin with. The government doesn’t have the money to give away, even though the Democrats think that they can do it anyway. But what the ex-students owe is already a loan from some bank. Life as an adult is about making decisions, and making good decisions and not ones you will later regret. Taking out a loan needs to be a heavy decision. Bankruptcy is not something we want in our society. Stupid people will always get crunched by the law, but these are not people who NEED BAILING OUT. If you sign for a loan, you should be responsible to pay it back.

But banks are holding these loans today. What Biden is doing is moving the debt from these banks to the federal government, the nation debt. Contrary to what these ex-students think, they won’t get cash. It is all done “on the books.” But it looks and feels good for Biden to gain support since he is mucking up everything he touches. This is no exception. After all is said and done, in a few years, people who had these debts will say, where did my money go? I never got a dime of it! Since these people ARE NOT PAYING THEIR LOANS TODAY, the banks are after them, so Biden is just getting the banks off of their backs. Again, the majority of these people are Democrats.

Pork Barrel Spending of the Swamp