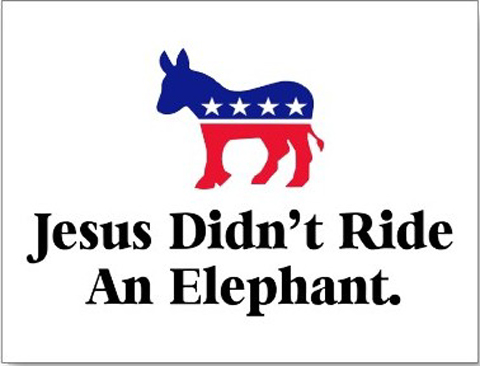 Why Christians refrain from being Democrats is an opinion piece on the issues for Christians with the general Democrat positions.

I think that politics and religion should not mix. That is the position that I try to maintain in my own life. But really. If you just take a step back and listen to what Democrats seem to always promote, it is very difficult for the religious side of a person to remain silent.

Democrats have become the party of abortions. But their position is not just to allow an abortion, but rather to take an extreme position that most common American citizens don’t take. They want abortions legal up until the moment of birth, and even after the child is born alive. I joked with my wife that most parents would agree to reactivating the abortion option when their kids are teens. But in all seriousness, a Christian cannot agree to abortion. There are other options such as adoption, or an even better option of just owning up to your sinful lifestyle that produces an unwanted child and be an adult about it, and raise YOUR child because you are responsible for your actions before God. Aborting a child is not how a repentant person would act.

Now we turn to how Democrats have mistreated black people on the whole. Why does Planned Parenthood (a favorite of Democrats that get government funding because of Democrats in Congress), why do they target black neighborhoods as locations for their abortion clinics? While you are answering that, answer me this. Why or how can they call themselves Planned PARENTHOOD when their objective is to keep adults from being responsible parents? They should call themselves hiding the consequences of sinful conduct clinics.

When we turn to family values, the article I linked to above reveals how Democrats want to destroy the nuclear family made in the image of what God presents us in Scripture because Christian families and the norms and traditions that come with that all stand in their way. They want something out of Satan’s playbook.

The real war here is simply these Democrats are against God. They are rebellious people who have never made peace with God, and they are against anybody that is obedient to God.

Why Christians refrain from being Democrats