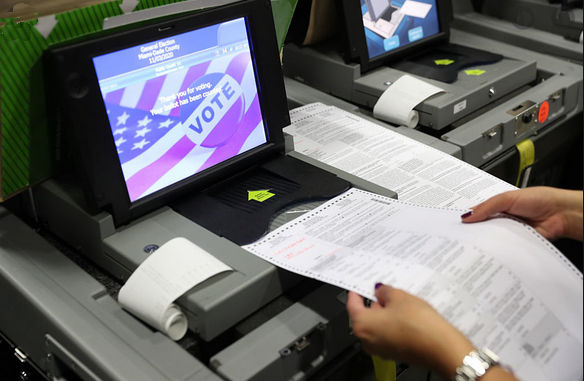 Antrim Dominion machine forensic analysis and the problems in this election, the evidence of fraud used by Democrats and ignored by Republicans.

The topline summary is that the Dominion machines in Antrim County were set up to send almost 70% of votes to “adjudication.”*

*Adjudication is where a human (two actually, one from each party in the election) sit down and look at the ballot and decide which person the voter meant. If they cannot come to an agreement, then it goes to a federal judge I believe. According to the Federal Election Commission laws for elections, those who put on elections cannot use any machine for the voters to vote if it produces more than .0008% of the ballots for adjudication. So this stinks royally!

It was this “adjudication” process that dictated which candidate would receive the vote.  And just to make the process more opaque, Antrim County did something in 2020 it had never done since it started using the machines: it deleted all the adjudication entries.  The server logs are also missing.

With that heads up, here are summaries of the main points: the audit found that two different Dominion software programs were in use.  Programs should be standardized throughout an election “if election tabulation is the expected outcome as required by US Election Law.”  This type of difference “is a design feature to alter election outcomes.”  Under the Help America Vote Act, the Safe Harbor factor mandates that changes to election systems must cease 90 days before an election.  Michigan made these illegal changes and used the invalid second vote counts for certification purposes.

Most states using these machines updated the software the night before the election!

On November 6, after an illegal post-election software update, there was a vote recount in tiny Central Lake Township (fewer than 1,500 voters) that saw the same 1,400-plus ballots being run through the system twice, with a greater than 60% change in outcomes.  Federal election law allows a ballot error rate standard of 0.0008%.  These changes “demonstrate[] conclusively that votes can be and were changed during the second machine counting.  That should be impossible.”