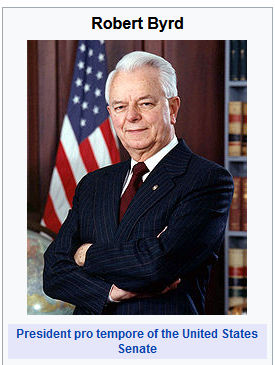 In his 2005 book, Robert C. Byrd: Child of the Appalachian Coalfields, Byrd recalled how his ability to quickly recruit 150 of his friends to the group impressed a top Klan official who told him, “You have a talent for leadership, Bob … The country needs young men like you in the leadership of the nation.”
As late as 1946, Byrd wrote to the Klan’s Grand Wizard: “The Klan is needed today as never before, and I am anxious to see its rebirth here in West Virginia and in every state in the nation.”

In his autobiography, Byrd wrote that he had become a KKK member because he

“was sorely afflicted with tunnel vision—a jejune and immature outlook—seeing only what I wanted to see because I thought the Klan could provide an outlet for my talents and ambitions. … I know now I was wrong. Intolerance had no place in America. I apologized a thousand times … and I don’t mind apologizing over and over again. I can’t erase what happened … it has emerged throughout my life to haunt and embarrass me and has taught me in a very graphic way what one major mistake can do to one’s life, career, and reputation.”– thoughtco.com

If Joe Biden’s eulogy of Robert Byrd was nothing to criticize Biden for, then it is interesting that YouTube.com apparently removed the video from their site. But see here, one they missed.

To the point: Byrd’s own given reason for changing his views is that he saw a black man lose his own son similar to Byrd’s experience, and that was what changed his mind about blacks. Is that a logical reason to change? No it was an emotional

My first point is that Robert Byrd’s orientation and worldview was white supremacist. People who are dyed-in-the-wool against the type of extremism of people like the KKK will not even get close to them. Given that yes, people can get involved into something and at a later time, see the errors in it, and flip. That is possible. But when they do, they do not just go to the middle of the road nor step into some of the opposite positions, but they condemn clearly what they were into.

Robert Byrd may have done that. He is now passed away. So there are pieces defending that he was not white supremacist nor KKK. (Rutgers piece here) So to clarify things, Byrd was a member of the KKK. Was he a grand master? The Rutgers piece says no but gives nothing but a simple declaration of the levels of KKK organization which proves nothing. Also, the KKK from its inception was a secretive organization, and its membership was hidden and shielded from public view, especially those at the top. So even knowing who were their leadership is not easy to ascertain. But those who publicly acknowledged their affiliation with it, that would seem to be easier and more substantiated. Even the Rutgers pieces “fact checks” the matter as partially true or partially false.

Both Hillary Clinton and Bill Clinton also had ties to Byrd. So the point here or the take-away, is that KKK and white supremacist find a welcome in the Democrat party and their members, but not in the Republican party. I explain this in my post on The Political Mirror Strategy.

I would also point our that his history is mixed with elements against racial segregation and for it.

Presidint Trump is right: no one should take any lectures on racial justice from Joe Biden. Biden spent his entire career praising segregationists and writing mass incarceration laws that decimated Black communities. Even Biden campaign senior adviser Symone Sanders admitted this month she “does not enjoy” being asked about Biden’s terrible track record of locking up minorities.

“The late Sen. Robert C. Byrd, the West Virginia Democrat and Senate majority leader who organized a Klan chapter in 1941 and filibustered the Civil Rights Act of 1964, is celebrated in the state, his name gracing over three dozen public works projects, including two federal courthouses, a dam on the Ohio border, libraries, community centers, roads, bridges, schools, and several university buildings throughout the state.” — thefederalist.com

So the above piece basically says that Byrd spent the later half of his life apologizing for his racist comments, activities, associations and positions. Would that shake if he were a Republic today? In no way. But getting Washington to spent 1 billion dollars in pork on his state, yes that makes him a hero in West Virginia. In Democratic eyes, nothing bad can be said about him.

When Byrd first ran for Congress in 1952, his Klan connection nearly proved to be his downfall. Before the Democratic primary, his opponents raised the Klan issue and Byrd admitted he’d been a Klansman “from mid-1942 to early 1943” before quitting forever. But after he won the primary, his Republican opponent produced a letter that Byrd had written to the Klan’s Imperial Wizard in 1946, long after he claimed he’d quit: “The Klan is needed today as never before, and I am anxious to see its rebirth here in West Virginia.”
Caught in a lie, Byrd was urged by Democratic officials, including the governor, to quit the race. He refused, won the election and began a career in Congress that would last 57 years. During the first dozen years, the former Klansman was, unsurprisingly, a vociferous opponent of civil rights. In 1964, he delivered a 14-hour filibuster against the Civil Rights Act that outlawed segregation. In 1965, he voted against the Voting Rights Act designed to ensure that black Americans could vote. — historynet.com

Byrd wrote that he continued as a “Kleagle” recruiting for the Klan until early 1943, when he and his family left Crab Orchard for a welding job in a Baltimore shipyard. Returning to West Virginia after World War II ended in 1945, he launched his political career, but not before writing another letter, to one of the Senate’s most notorious segregationists, Theodore Bilbo (D-Miss.), complaining about the Truman administration’s efforts to integrate the military.

Byrd said in the Dec. 11, 1945, letter — which would not become public for 42 more years with the publication of a book on blacks in the military during World War II by author Graham Smith — that he would never fight in the armed forces “with a Negro by my side.” Byrd added that, “Rather I should die a thousand times, and see old Glory trampled in the dirt never to rise again, than to see this beloved land of ours become degraded by race mongrels.”

Byrd won the primary, but during the general election campaign, Byrd’s GOP opponent uncovered a letter Byrd had handwritten to Green, the KKK Imperial Wizard, recommending a friend as a Kleagle and urging promotion of the Klan throughout the country. The letter was dated 1946 — long after the time Byrd claimed he had lost interest in the Klan. “The Klan is needed today as never before, and I am anxious to see its rebirth here in West Virginia,” Byrd wrote, according to newspaper accounts of that period. Byrd makes no mention of the letter in his new book.

Byrd said last week that his membership in the Baptist church tempered his views and marked “the beginning of big changes in me.” And like other southern and border-state Democrats of his time, Byrd came to realize that he would have to temper his blatantly segregationist views and edge toward his party’s mainstream if he wanted to advance on the national stage.

Still, says Ken Hechler, 90, a liberal Democratic former U.S. House member from West Virginia who served with Byrd in Congress, “It’s impossible for anyone to try to whitewash the KKK and its overall symbolism.”–WashingtonPost.com

In fact, ten years ago today, Joe Biden praised Robert Byrd, the former Ku Klux Klan “Exalted Cyclops,” and referred to him as a “friend,” “mentor,” and “guide.”

Biden has a long history of being cozy with segregationists. In 2019, he invoked not one, but two segregationist Democrats (Senator James Eastland of Mississippi and Senator Herman Talmadge of Georgia) he had good working relationships with during his time in the U.S. Senate. Several of his former primary rivals called him out for this.

“Vice President Biden’s relationships with proud segregationists are not the model for how we make America a safer and more inclusive place for black people, and for everyone,” said Cory Booker. Biden even demanded an apology from Booker for his comments on Juneteenth.

Kamala Harris accused Biden of “coddl[ing] the reputations of segregationists.”

Biden’s praise of racist liberals goes back many years.

“I think the Democratic Party could stand a liberal George Wallace,” Biden said in 1975 of the then-governor of Alabama. “Someone who’s not afraid to stand up and offend people, someone who wouldn’t pander but would say what the American people know in their gut is right.” George Wallace was a known racist and segregationist, who, just twelve years prior, stood at the door of the University of Alabama in order to block two black students from enrolling.

In June 2006 Biden quipped, “You cannot go to a 7-Eleven or a Dunkin’ Donuts unless you have a slight Indian accent. I’m not joking.”

If “character is on the ballot” in November, you won’t find it with Joe Biden. — pjmedia.com