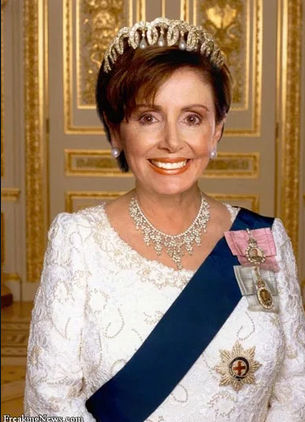 Queen Pelosi has replaced our Constitution is an opinion piece explaining where the Congress is now directed by Pelosi, not its own laws and the Constitution of the United States.

It does not take much watching of Nancy Pelosi to see that she has disdain of the Constitution which she swore to uphold except when she can somehow twist things to make other people disobeying the Constitution, then she uses the loyalty to the Constitution against them.

Nancy’s understanding of the House of Representatives in our Government

House Speaker Nancy Pelosi on Wednesday declared that Congress is a “superior branch” of government, as the clash between congressional Democrats and the Trump administration over closely held documents intensifies.

Uh… what!? What does Pelosi even mean when she says Congress is a “superior branch” of the government?

She’s basically trying to change the Constitution – and so fundamentally, she’s tearing it up in broad daylight for all of America to see.

Pelosi boasts that Congress has the power to “make the law” and Trump can only enforce it.

Uh, no, Mrs. Speaker. It scares me to death that you forgot your high school civics.

Congress and the White House (legislative and executive branches) are co-equal branches of government. They provide checks and balances to each other, along with the Supreme Court, but none of them are “superior.”

You should be worried. I am. — gopdailybrief.com

So if a Congressman doesn’t understand that there are three equal branches of government that have checks and balances between them, then this will lead to there being imbalances in government. When that congressman is the speaker of the House, that makes things worse. Nancy should be “taken to the woodshed and given a good paddling” for her work. Actually the House rules person should sit her down and make her understand and stop her foolishness, or he should bring her actions before the whole house and remove her from Congress. Fat chance that will happen.

Mr. President, you need to prove your innocence. — WashingtonTimes.com

Can you say Fifth Amendment?

House Speaker Nancy Pelosi on Trump commuting Roger Stone’s sentence: “I’m recommending that we pass a law that presidents cannot issue a pardon if the crime that the person is in jail for is one that is caused by protecting the President, which this was” https://t.co/ZzhLshSw7I pic.twitter.com/WCwCM5Xvq2

Yea. Give this thing 10 years and the Democrats will flip on this one big time when one of their presidents are trying to pardon people who helped him (like Joe Biden pardoning those who cheated to help him get in office).

While there is a law removing Congressmen after the Civil War for seditious activity, this cannot be applied today to the Republicans. They are not against the Constitution, they are against the Democrats. There is a big difference.