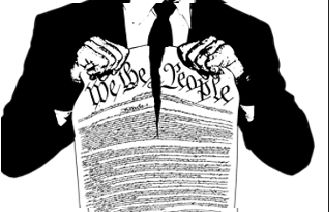 The Overturning of America´s Constitution is an editorial piece on how the principles of our country are being systematically overturned. It is very disheartening to see powerful political people manipulate our country´s founding principles in order to put themselves in power and keep them in power. But Nancy Pelosi and the Democrats are doing exactly this. The laws are good for attacking their enemies, but those same laws do not apply to the Democrats. There is a two-tier legal system now in place.

Every man has his fair day in court. — Not any more

As we quickly move to mob rule, the idea of laws and people must be formally charged in a fair court of law where they can hear the charges against them, and they are innocent until proven guilty, has all gone down the drain. The official court of law is not the news media, and whatever the Democrat and liberal movers and shakers demand is true, only that is true.

There has to be extremely clear evidence that a law was broken. — Not any more.

Mob rule is never logical. People are worked up emotionally, and logic has little to do with their decisions and actions. This is where we are in America today. When people forget or refuse to admit that they live under laws, and their actions become founded on fads and emotional “causes”, then their lives are baseless.

Every single law made in America today has to be compared against the overarching, overriding principles set forth in the Constitution to see if they break that Constitution or not.

Republicans basically hold that the Constitution gives us a broad framework that all laws and actions must fall within that framework or cease and desist. Unfortunately, the whole country is not agreed on this, and this position of lawfulness as under the Constitution was how this country was started, and breaking that principle and moving away from it is how this country will fall.

The Constitution’s Republic aspect must be respected.

Here the “Republic aspect” is not a Republican party aspect, but in the formal definition of the word “Republic”. A Republic is a country with a government set up with over arching rules and principles. The United States of America is a democratic Republic. That means that while these overarching general principles, rules, and laws are over everything else, we decide the “everything else” by a democratic vote.

A “democratic vote” is when a vote of all legal citizens in a particular place decide a law or politician. Within the framework of the Constitution, laws are made which are according to the will of the people. None of these laws can overthrow the foundational framework of the Constitution, and the Supreme Court will have the power to overturn any law that is “unconstitutional”. Again the supreme law is in the Constitution as the founders gave them to us. Adding, changing or removing any of these laws should be a grave and important point, not easily done.

When we speak of a”democratic vote,” we must insist that this vote be taken by all legal citizens, non-citizens should participate in their own countries politics, not ours. Only those citizens that are alive, and legally allowed to vote. Those persons who commit crimes lose their rights to vote because of their actions. Citizens should vote in only one place, and only one time. Nobody’s votes counts more than one time.

Likewise the counting of the votes must be public with all candidates having poll watcher-s verifying what is going on. All valid votes should be entered into the tally, and questionable votes are decided by a bi-partisan group of at least 2 people who finally decide what to do with it. Otherwise these questioned (challenged) votes should go to a judge to decide, again with complete openness as to what, why, when, etc.