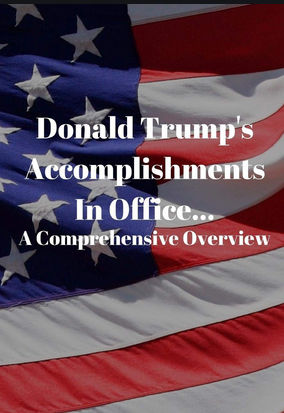 • Recently signed bills expanding the eligibility for vets with blindness in both eyes,
and requiring the VA to establish a treatment court program for vets who need
treatment rather than punishment for certain nonviolent crimes.
We are standing up for our great African-American community:
• Signed groundbreaking Criminal Justice Reform.
• Secured record & permanent funding for Historically Black Colleges and Universities.
• Created Opportunity Zones – $100 billion dollars of new investment have poured in.
• We achieved the lowest black unemployment rate in history, and will do it again.
• We’re fighting for SCHOOL CHOICE – education is the civil rights issue of our time.
We are ensuring Great Healthcare with MORE AFFORDABILITY and MORE CHOICE:
• Repealed the core of Obamacare – the unpopular individual mandate penalty GONE.
• Also eliminated the health insurance tax, medical devices tax, and the Cadillac tax.
• New insurance options through association health plans, short-term plans, and
health reimbursement arrangements; some are up to 60% less expensive.
• Prescription drugs saw their largest annual price decrease in over half a century.
• To empower patients to choose the best doctor at the best price, we’re giving
Americans transparency with the price and quality of services before you buy.
We are ensuring PROTECTIONS FOR VULNERABLE PATIENTS:
• We are protecting people with preexisting conditions and preexisting physicians.
• We are protecting Medicare and Social Security for our great seniors.
• We are working with Congress to stop surprise medical billing.
• We took executive action to strengthen Medicare and reformed the Medicare
program to stop hospitals from overcharging seniors on their drugs.
• Medicare Advantage premiums have decreased by 27% and Medicare Part D
premiums are the lowest in 7 years.
• Made new plans available for individuals with chronic conditions that cover
medications like insulin without cost-sharing.
We are turning the tide on the crisis of addiction with $6 billion in new funding:
• Drug overdose deaths fell nationwide in 2018 for the first time in nearly 30 years.
• Many of the hardest hit states have had the biggest drops, including:
OH (22.2%), PA (26.0%), KY (17.8%), FL (4.6%), IA (5.9%), and WV (18.0%).
• Opioid prescribing has fallen by over 35% since January 2017.
• We are stopping more fentanyl from pouring across our border (+21% last year).
• We launched FindTreatment.gov, a tool to find help for substance abuse.
• Investing an additional $100 million dollars to fight the opioid crisis in rural America.
We are ensuring Great Healthcare with initiatives to SAVE AMERICAN LIVES:
• We passed Right-To-Try to give critically ill patients access to life-saving cures.
• We launched an initiative to end HIV/AIDS in America.
• We are fighting kidney disease with more transplants and better treatment.
• We launched a $500 million dollar initiative to find cures for childhood cancers, and
are pursuing medical breakthroughs to save pre-mature babies.
• U.S. cancer death rate dropped to its lowest level in recorded history.
We are working to end the scourge of Human Trafficking:
• The Justice Department issued $35 million in grants to 73 organizations nationwide
providing assistance to human trafficking victims and survivors during COVID.
• Signed several pieces of legislation confronting the threat of human trafficking while
supporting victims and survivors, and holding traffickers accountable.
• In the last three years, ICE has arrested over 5,000 wicked human traffickers.
• In 2018, DOJ closed down the leading site for sex-trafficking on the internet.
• HHS hotline identified 23,000 survivors of human trafficking in 2018 alone.
Additional Accomplishments:
• The Tennessee Valley Authority reversed layoffs and is rehiring American Workers.
• Won bids for the 2026 World Cup and the 2028 Summer Olympics in Los Angeles.
• Announced that my administration is un-signing the U.N. Arms Trade Treaty.
• Signed Paid Family Leave for federal workforce, a model for the rest of the country.
• Our Pledge to America’s workers has secured commitments for over 16 million job
and training opportunities from employers nationwide.
• Protected our beautiful lands and waters by investing billions of dollars in water
infrastructure and by cleaning a record number of toxic 8t polluted superfund sites.
• Approved billions of dollars in projects to bring broadband to 350,000 households in
rural America.
• Launched W-GDP, a robust whole-of-government approach to global women’s
economic empowerment with goal of empowering 50 million women by 2025
though vocational education, promoting entrepreneurship, and legal reforms.
• Secured largest ever increase for child care funding—helping more than 800,000
low-income families access high-quality and affordable child care.
• We are pursuing vocational education in every high school in America.