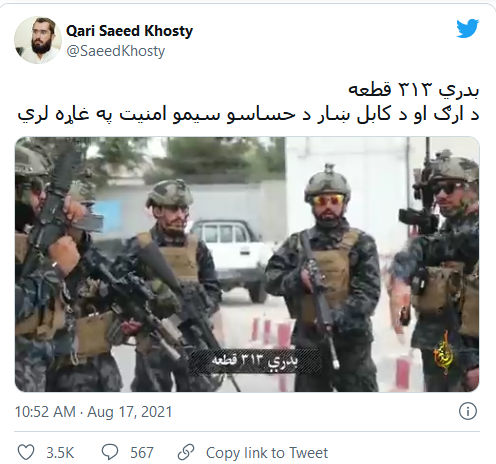 Daily News Links August 22, 2021 is a short summary from many different news websites that are oriented towards conservative points of view.

In general, what is happening today…

Afghanistan continues the evacuation of Americans and pro American Afghans. Taliban poses in US army gear that we left behind. Taliban going house to house to find AND HANG those that worked with the Americans. Biden cannot recall if he was advised by Intel to keep the troops in Afghanistan, but declares incorrectly that nobody is getting killed over there (Kabul airport). Mid-July report by State Department employees in Afghanistan state the the Taliban are near to taking over. So, #1 Biden got the memo and forgot it, #2 Biden got the memo and didn’t believe his own people on the ground over there, #3 Biden’s communication with his own people is so messed up that he didn’t get it, or it got lost in the shuffle. Any way you slice it, Biden and company is a disaster and responsible for everything that is happening. Biden says nobody is being killed in Afghanistan, “God forgive me if I’m wrong.”

Joe Biden and his Team

A Reuters/Ipsos poll finds that the majority of US people say the United States is heading in the wrong direction. Biden repeatedly wanted to take the blame on himself if things went wrong, now not so much. As if optics of Afghanistan is horrible for Biden and the Democrats, Biden was planning on charging Americans $2,000 each to be flown out of Kabul Airport. Second source. Trump had a program to evacuate stranded  Americans in situations like this, but Joe cancelled it. Joe is also ignoring anything to do with it.

Joe continues to peep in and out of sight. Never answering questions as criticism even among Democrats is growing day by day. Simply put, Afghanistan is a train wreck. Some are calling for his resignation over it and other failures. Tony Blair accuse Biden’s pledge to withdraw as he has/is doing as being “imbecilic.” Macron rebukes Biden on WH call, WH scrubs it from the record. British ex-commander suggests Biden should be court marshaled. Celebs and Angelina Jolie mad at Biden over Afghanistan. Megan McCain unloads on Joe Biden. “nothing short of pure rage and anger since the calamity of a ‘pull out’ which will be seen as one of the greatest foreign policy catastrophes of my lifetime,”

As Biden messes up royally with Afghanistan evacuation, Biden now petitions Congress for another $3.3 billion dollars to clean up the mess he made. This brings to mind Obama’s action of giving the Iran terrorists billions of dollars in cash on pallets. It is not enough to not block terrorist groups, Democrats want them to have untraceable cash. Biden will undoubtedly send food and all kinds of aid including cash to Afghanistan just before everybody leaves so that the Taliban can get this too.

Sec of State Blinken misspeaks and names the wrong President of Afghanistan. “Afghanistan’s President is Ashraf Ghani, Hamid Karzai served as president from December 2001 to September 2014.” Blinken makes a statement about holding terrorists to account goes over like a brick. Chinese Foreign Minister Lectures Antony Blinken on Afghanistan.

The US Supreme Court has issued a ruling saying that Trump’s Remain in Mexico policy works just fine for restraining illegal immigration and Biden has to return to it since it is American law. Biden is trying to get SCOTUS to reverse their ruling. The issue is that illegal immigration is against US law, and Biden has sworn himself to uphold the laws of the land, and this law he is breaking with deliberation. Biden sued for reversing Trump’s immigration policies because Biden’s policies increased dramatically flow of fentanyl.

The Kamala Harris Break away Rebellion

Kamala Harris has run away to Southeast Asia. Rumored that White House personnel heard Harris screaming at somebody in Biden’s office that she will not let them pin Afghanistan on her. This comes as she is seeing Joe Biden’s mental decline, and there are also rumors that she is talking to Biden staff to see if she has a consensus of them to remove Biden under the 25th amendment. Jill Biden meanwhile hates Kamala and is said to be the one protecting Joe from Kamala.

Democrats and their Plans

According to a Pew Poll, Democrats are increasingly wanting the US government to censor opposing ideas without giving them a fair hearing. The time when Democrats debated their ideas and policies in the court of public opinion is now over. They want the government censors to block anybody that isn’t pushing their own point of view.