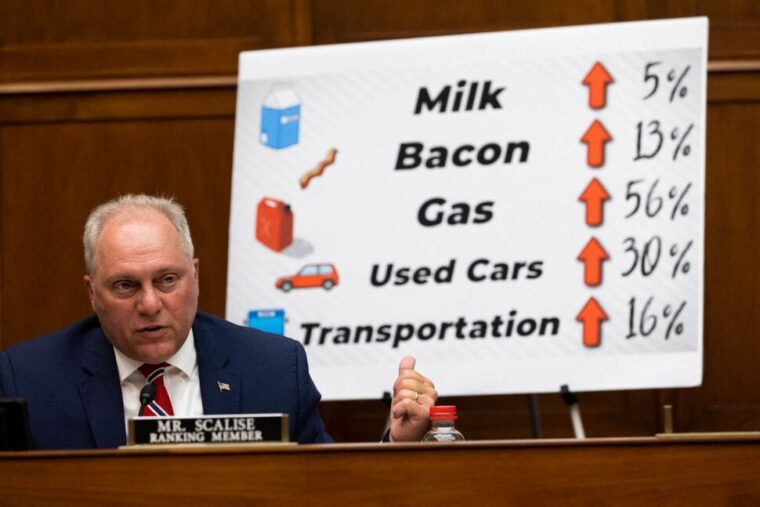 Democrat Landmark High Inflation is a short article on party policies and their real effect on us.

The Bottom Line of any Political Campaign

In the wars and fights between political parties, the bottom line is are we better off after a group has control and has worked their position and policies? Once a group has control, and doing things that they want and how they want things done, and everything is going wrong, then they accuse the other group of hindering their agenda. That is always done it seems.

But we have to get done to the nitty gritty of political goals and policies, and what is really being done, and what are the consequences?

The Republican Idea of Governing

Of course Democrats dislike how the Republicans do everything, every goal that they have. But we see under Trump, the country was flourishing. People had more disposable income. Inflation was down, work was up, and real income growth was happening across the board, and especially with subgroups like women, blacks, Hispanics, etc.

The Democrat Idea of Governing

The present Biden administration has the Fed working for them. But even the Federal Reserve admits in this article that I refer to above that inflation is getting out of hand. The bottom line here is that the Democrats get power (which includes them stealing and maneuvering so as to make their personal worth jump up greatly) by means of giving away taxpayer money. We all pay taxes or we should pay taxes. But exactly how is this a good thing? I mean besides paying my taxes, now I have inflation to worry about and frankly it is a hidden tax.

Inflation affects all investments. That means that inflation will eat the retirement funds that everybody has invested. So since the Fed has for 20 years now reduced the interest rate, you cannot make any kind of money by investing. A bank savings account makes so little interest, that it is “of no account.” But with inflation, even the capital you started with is eroded. Ten thousand dollars invested in 1980 may grow to $10,100 today, but you can only buy about 60% of what you could the day you first invested it. That means things are bad.

The Democrats have to “own these policies” come voting time. They cannot even convince people, even Democrat people, of the good elements of their policies. So they cheat. If the world is caving in on them come elections, they have provoked this on themselves by their greed.

More Articles dealing with the Democrat Party in General