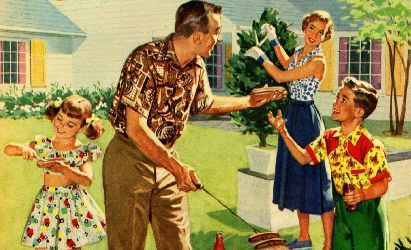 Democrat war on the Traditional Family is an opinion piece about what the Democrats’ true position is towards the traditional family.

I guess everybody’s opinion starts somewhere, and from the place where you start, what you personally believe, then you can get a good idea where people are going. So let me start with me, what I believe. God created the world. Yes, we do not discuss IF GOD EXISTS, he just does. Nobody can conceive of how the world exists without a supreme being doing it. Science and the scientists that exclude God have nowhere to start. A Big Bang Theory is presumed. So that could have happened, but in the discussion of our beginning, you skip the part where you explain how the material began. A big glob of matter existed and it exploded. Where did the big glob of material come from then? Exactly the point, they pick up creation some time after creation started. That is man’s sinful heart that refuses to take into account and just accept God. Doing that turns that man upside down in his thinking. No other way we can understand it.

As a scientist, how are the laws of science influencing him? He observes, then postulates a probable reason of how the universe is, and then he tests by observing and doing tests that would prove some, part, or all of the theory, and then he submits his findings to other scientists to disprove what he seeks to prove.

In the end analysis, there are two things that are “posited” as real. 1) There are principles behind the functioning of the world (and an honest scientist admits that God is making the world consistent through these principles). 2) Without an observer and testing, a human cannot declare a principle as existing. If you mix oxygen, gasoline, and provide a spark, an explosion will happen. If that principle worked sporadically, like 30% of the time, the modern gasoline motor would not exist. The faithfulness of that always happening because there is a physical matter principle behind it is what makes things that man can use them. So the faithfulness of God is underlying everything in science. Take God out of the situation and you have, well… climate change.

Climate change doesn’t work by fixed principles. People interpret things that happen according to ideas that they have. In one case, the sun causes global warming. But in other computer models (people’s ideas) causes global cooling. There are no stable always the same principles behind these “musings” and guesses of people. Nothing in this is scientific either. They are just playing with ideas, and like chicken little who got hit in the head and thought the sky is falling, they are running around spending other people’s money to fix “the sky is falling”.

But there is a safe and sure set of principles of how God is running the physical world. It is stupid of us to disavow these principles and the Divine Person who installed them and continues to impose them, “just because.” The just because is because the person individually is fighting against God in their thinking. But the key take away here is that when people refuse to acknowledge and abide by God and his ways, his rules, his goals that he blesses, and away from the conduct that God hates, and worse, when we do not see what God sees as abomination, then there is nothing good ahead. It is like a scientist who refuses to think that gasoline, oxygen, and a spark is bad. He will get burnt eventually if not consumed in that fire of unbelief.

What is the Traditional Family as God gives it to us?

God exists as a trinity, God the Father, God the Son, and God the Holy Spirit. That is because God is love. To have love you need three things. Two people and the actions of love going between the two people. This last one is also a person, the Holy Spirit. As any man and woman that comes together in love and live together knows, babies are usually coming.

So the production of a baby when a man and woman come together in love is a natural, unforced byproduct of their love, thusly is how God works. Two homosexual men “making love”, or two lesbian women “making love” will never have reproduction of humanity as a consequence. Neither will any transgender male have a baby. These people reject God and his principles, and the reality of the world “work against them”. That is, 1) what kind of relationship that they have is not love but unbridled lust, a perversion of what the true reality is. You need a male and a female to make a reproduction of a human being. Two lesbians can get a male’s sperm and produce a baby, but the rule is not broken. They had to get a male. Their way of living and thinking is “unscientific”.

Now we see that males can put on a bra and “become” a female. But that is not true. That is not reality. You can give male hormones to a female and stop their natural process of growth into an adult female, but that person who does that will become infertile. The female will not be able to have babies in the future.

In Proverbs 8, God deals with wisdom, and that it is the good stuff. We should seek after wisdom. Proverbs uses a poetical practice of personification in chapter 8. Jesus, the second person of the Trinity, is likened to be wisdom, and his existence along side of God the Father as being two twins who are extremely content and happy with just being with the other person. This is companionship. Friendship.

So God enjoys eternally the fellowship between Father and Son and the Holy Spirit. God transplants their same joy in the presence and fellowship with another person into man’s experience through marriage. As in the Trinity, each is equal, but at the same time, each is different. Each person has their own roles and particular things that they are in charge of, and even a “pecking order”, that is the Holy Spirit is subject to the Son and the Father, the Son is subject to the Father, and the will of the Father is over everything. But their are still equal in some inexplicable way. One is not a slave to another.

This is how God has instituted things in our humanity. Men are to join with a single woman for life, until death do they part. There is to be a union, a bond, a one flesh, in which neither betrays the other with bringing in another person into the family. The only acceptable “other person” is when they have a child or adopt a child.

What are the sins of human relationships in the family

The Bible is laborious about outlining and condemning these sins. Men and women are not to have sex outside of a marriage bond between the two people. This is fornication when neither are married and it is adultery when one is married. From the start, there are only two genders, male and female. Go look at a biology book, and it is very clear that in the animals that God made, the principle is that you need a male and a female to reproduce. Without that, you will find very rarely or never that a species reproduces. Perhaps bacteria or something, but in the animal kingdom that is the principle.

Another of the issues we commonly find is the difference between adults (that are capable of reproducing and self maintenance) and children. Children are off limits for the sexual perversions of adults. (Also sex between children).

The Democrat war on and Fight against the Traditional Family

Democrat war on the Traditional Family. The Democrats apparently are warring against God because they are launching a strong war against biblical family values. The Democrat war on the Traditional Family is being waged in our government and the laws that are made by our government. Abortion is defended and encouraged as though it was as American as voting.

If we understand how their chosen rebellious lifestyle “doesn’t work”, i.e. they cannot naturally reproduce living by that lifestyle, then we understand why the homosexuals in Genesis 19 had such a strong desire to force sodomy on the angels. This is called rape. But they think that by having sodomy (even unwillingly) with others, that that will make them homosexuals.

Illicit sex in any context between two people who are not married to each other is protected by the Democrats. Abortion is just their “solution” to these sexual episodes. If the newborn could vote, then they would take a different tack surely. They abuse illegal aliens so that they will vote for the Democrats. Democrats do not give citizenship to illegals. The Federal Government under the Congress and President grants citizenship, and even if all of these are Democrats at some point, all parties are responsible for what is done. You cannot just give credit to one particular party. In public assistance,  the money given to people comes from taxpayers, as the authority to grant citizenship, and therefore no one party can take the credit or is totally the blame.

Democrat war on the Traditional Family