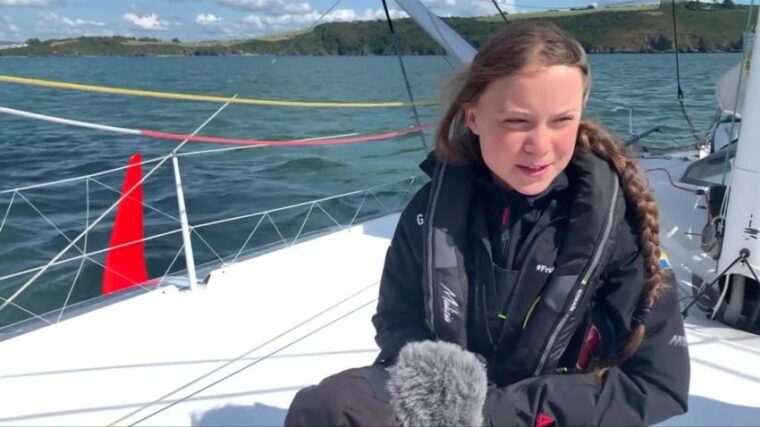 Let me begin by saying that I do not like Greta Thunberg. The reason why is simple. She doesn’t represent anything reasonable. In other words, what studies in climate change has she done? What scientific achievements has she done? What technical knowledge does she have in either infrastructure, weather science, etc. She has no expertise except a big mouth that she shoots off regularly to rebuke other people who make the world go around.

What I am saying is that to heard in the forums on climate change today, you really need to bring something to the event that would cause others to listen to you. What does Greta have? Has she even worked a 8 to 5 job to support herself? No. She is a kid. As a kid, we should not give her more than her due, which is no voice in climate change.

Grow up Greta! After you have earned a legitimate PhD in climatology (no honor gift PhD), then where should we put you. After all the other climatologists that have 40 years experience. You don’t get a free pass in any of this.

Climatologists get it wrong

One of the most difficult tasks for modern scientists is to predict the weather. If they cannot predict the weather more than a week away from today, and within that week, they have a horrible track record of predicting accurately what the 7 day forecast will be, then how are these “experts” going to predict something so far away as decades from now?

What is happening is not predictions of the future but political movement of the present using weather as a scare tactic. I grew up in a seaport. When I see these seaports having to rebuild the docks another meter above where the old dock was, then maybe I will change my mind. But in 64 years that I have lived, I don’t see even an inch of raising sea level. All I see is extremists screaming the end of the world.

The key point here is that in climatology, you can barely understand the 7 day forecast, but for long term weather, you need thousands of years of data points because God works weather over long periods of time. The scientists talk like they know what has happened in weather over thousands of years, but they don’t. The rule that we all know well is that weather gets warmer and it gets colder. How much changes from year to year, but nothing in the past is really a predictor of what is going to happen now. Hurricanes happen. But some years they are almost nothing. Other years they are very destructive. No weatherman can accurately predict what this year will be.

If you know anything about boats, this is ridiculous. (But it is instructive if you really think about it.) First of all, most of the trip across the Atlantic was by sail. Great. Zero emissions. But how did that sailboat get out of port? How did it get back into port? Sailboats lower their sails and turn on their diesel motors to get out of port and to get back in. The use of wind power in port is totally ridiculous. First there is very little wind that usable in a port, and second, that is a good way to have an accident.

But so what is the working understanding here? You can even devote the ship to wind power, but if you don’t have carbon fuels to back that up, things are going to get ridiculous. So there has to be the undergirding support of fossil fuels to even use wind and solar a little bit.

There are literally tons of coal that has to be consumed to make a wind mill or even solar panels. All of this is done in China where pollution is not an issue for the Chinese to make money. The political pressure on all of this is to cripple America’s energy, therefore only those countries who don’t participate in climate kookiness are the ones who will come out of this. China is 100% for climate crippling western countries but they themselves will conform 0% to any of this foolishness. Convenient.

This is what all of this is really doing. People get on the band wagon behind climate control but they just want to feel good about themselves and denigrate others that don’t, but they really change nothing in our world. A few years ago there was a big push for recycling. But after a while (and many laws making people and businesses recycle) we find out that China no longer wants our trash. Australia neither. They were not ever recycling all that trash, but they were just taking a little bit of what they wanted (aluminum, gold, silver, copper, etc.) and putting the rest in landfills. When US people handling the trash found out about this, they took most of that out of the trash, and China shut down this all down. So where is the dedication to recycling now?

Greta is a political activist, not a climatologist

“Greta is amazingly courageous to be standing up against ignorance and injustice regarding the climate crisis,” said Herrmann. CNN

The truth of the matter is that Greta Thunberg and the rest of the climate alarmists are just political activists. They are like the old Green Peace. Save the whales. They want to “feel good about themselves” like they are making a difference, but they don’t want to really deal with the truth of our lives.

Before all of this climate stuff started, some brilliant scientist should have developed a battery the size of a gas powered car’s battery that will cost the same as a gas car battery, and charge in a half hour and run for 12 hours on that charge. If they had started this with such a battery, and those cars cost the same as a gasoline powered car, then I would be on board. But with the restrictions on EVs, no way.

The quote above attributes Greta to standing up to “ignorance”. But where is Greta’s wisdom coming from? Shut down all fossil fuels. Yea, that shows she knows very little about how our world works. Since we insert here governments like the United States government are making wood burning stoves illegal, I wonder what powers the heater in Greta’s house? Electricity runs by some fossil fuel. If she lives in cold weather country, where there are meters of snowfall each winter, how does she keep warm? If she practices what she spouts, she will not use a wood burning stove. Solar and wind are not going to work especially when it is night (the coldest time of the 24 hour cycle). So that shows she is not living in the real world. She conveniently overlooks the point that her parents use electric heat that comes from liquefied gas or coal.

Is it Global Warming or Global Cooling?

It should not pass us by without our meditation on it, that these people are claiming that we are under global warming because of the CO2 hot house effect. We should be so lucky. This winter is going to be cold. So if we have global warming, the people in Europe should be wearing short sleeve shirts all winter with no coats. Is that going to happen? Probably not. So the clinical evidence of what the actual weather is today and in our times is the strongest evidence AGAINST what these climate activists are saying. They say it is getting hotter and hotter. It is not. It is the same as always, some years very warm and some years very cold.

How does this work? If it is severely cold, then they say that proves that their theories are right. What? They are saying that the climate is warming, not cooling. Any thinking person knows that Greta is not dealing with reality.

Neither can you flip flop back and forth depending on the season of the year. That is science? Now they claim that the problem is global climate change (both hotter and colder). Duh? That is called just weather. They add nothing to our understanding of what is going on in our world. They confuse people because they are political activists, not climatologists.