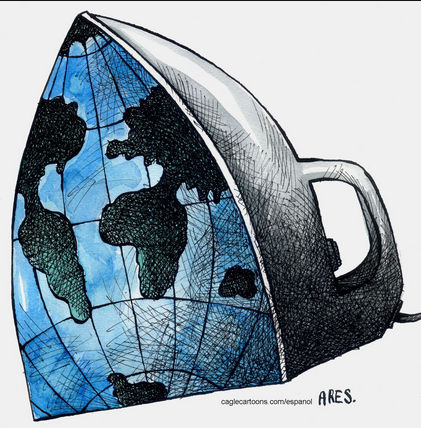 Myth #1: LW would not be expensive.
Myth #2: The costs fall on industry, not consumers.
Myth #3: Global warming is a crisis that must be addressed at all costs.
Myth #4: LW effectively addresses the threat of climate change.
Myth #5: LW’s cap-and-trade approach is a proven success.

Myth #1: LW would not be expensive.

Fact: Simply put, LW works like a massive energy tax. By restricting carbon dioxide emissions from coal, oil, and natural gas–with a freeze at 2005 levels beginning in 2012, to a 70 percent reduction in 2050–the bill forces down supply and thus boosts the price of energy. In fact, if energy prices did not go up, then the targets in the bill would not be met. As energy is the economy’s lifeblood, and 85 percent of it comes from these fossil fuels, the impact will be substantial. Cumulative gross domestic product (GDP) losses could reach $4.8 trillion by 2030, according to an analysis conducted by the Heritage Foundation. The Massachusetts Institute of Technology, the Environmental Protection Agency, Charles River Associates, and the National Association of Manufacturers have all conducted studies predicting significant economic burdens on consumers should the bill be enacted.

Overall, the Lieberman-Warner bill promises substantial hardship for the economy overall, for jobs, and for energy costs. Given current economic concerns and energy prices, this is the last thing the American people need. At the same time, the environmental benefits would likely be small to nonexistent. The Lieberman-Warner bill fails any reasonable cost-benefit test.

Myth #2: The costs fall on industry, not consumers.

Fact: Virtually all the burden imposed by LW falls upon consumers. The bill will spur net job losses well into the hundreds of thousands, and possibly nearing one million. Particularly hard hit is the manufacturing sector where over one million jobs will be lost by 2022 and two million by 2027. The losses in household incomes could reach $1,026 per year by 2015. Annual household energy-price increases could hit $1,000 by 2030, including a 29 percent increase in the price of gasoline from 2008 levels.

Myth #3: Global warming is a crisis that must be addressed at all costs.

Fact: Global warming is a concern, not a crisis. Both the seriousness and the imminence of the threat are overstated. For example, the recent United Nations Intergovernmental Panel on Climate Change report estimates 7 to 23 inches of sea level rise by the end of the century–far less than the widely popularized claims of 18 to 20 feet and little more than ongoing trends over the past several centuries. The attempt to link Hurricane Katrina with climate change is directly contradicted by the World Meteorological Organization and many scientists. Overall, current and expected future temperatures are far from unprecedented, and are highly unlikely to lead to catastrophes.

Fact: Even assuming the worst of global warming, LW reduces the threat by a minuscule amount. The bill reduces emissions of carbon dioxide and other greenhouse gases in the United States only. China has overtaken America as the world’s largest emitter, and its emissions growth is several times greater than that of the U.S. India and other fast-developing nations are on a similar trajectory. Thus, the unilateral impact of the bill on global emissions would be inconsequential. At most, it would reduce the earth’s future temperature by one or two tenths of a degree Celsius–too small to even verify. In other words, LW is all economic pain for no environmental gain.

Taken from Five Myths About the Lieberman-Warner Global Warming Legislation