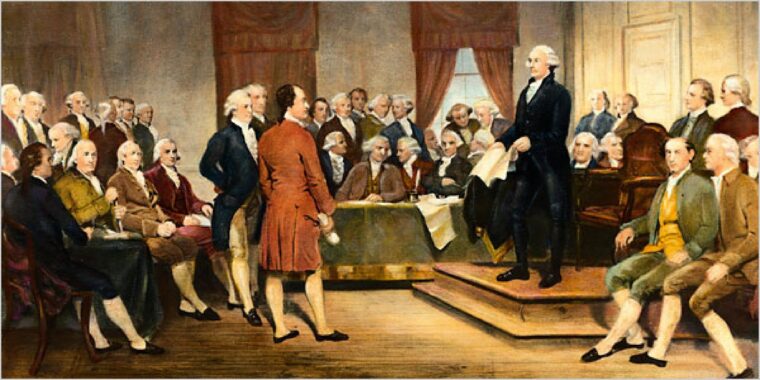 America’s Founding Fathers and Slavery is an opinion about slavery, trying to understand it as in the contest of the founding fathers.

We need to learn to understand others, and not just condemn them out of hand. The true spirit of the Constitution and of America is that same spirit that was in the Old Testament. That spirit is one of respecting others.

The Democrat party is currently having a blame-fest of trashing our country and our founding fathers as if they were horrible people. They were not. They were giants in comparison with the low life people we currently have in politics and Hollywood.

The World as it Was

Since probably nobody in the present day has slaves (at least not in the United States), we do not understand what the entire institution was. Slavery is when one person is “owned” by another person in order to get use out of that person. Almost exclusively, this speaks to labor. Physical, manual, hard labor is what is involved.

Before we get too uppity up, the United States uses this same physical, manual hard labor of the immigrants that they are allowing to flood our country with. If the taking advantage of a black man was wrong in colonial times, why is it right today then? There is a double standard here with what is going on.

There are people (black, Latin, and even white) that work hard and sweat a lot to get a day’s work done. But if you go to a steel mill in the north-east, you will find union workers that truly put in a hard day’s labor. But they don’t mind doing so because they are very well paid. They retire with their $300,000 to half a million dollar house up north, and a $300,000 mobile home to travel about the US in, and their winter house in Florida also worth a half a million dollars. They have a huge pension or retirement feeding them all the money that they could want.

So what is the difference between that steel worker and that illegal Latin immigrant? What is paid him. That is the difference. Also the rights and privileges that he has. The steel worker will come and go a half dozen times out of the country in a single year on vacation but the illegal has paid $20,000 to a coyote to get him into the US, and he hasn’t paid that off, so he isn’t going to incur that expense again soon.

What people are made slaves

This is an important point. But first, among the black people, they were warring against each other, tribe against tribe, and black people made other black people (tribes that they didn’t like) into slaves. So when you put all the blame on the white people in America, you overlook who was actually doing the enslaving.

Secondly, not all slaves were black people. Some were white people. In England, white people sold themselves into “endenchured service”. While technically this was not slavery, in reality it was. It just had a time escape point that after 7 years normally the person would be free of this slavery. Black slaves were in perpetual slavery including their offspring.

I do not approve of slavery personally, and I cannot imagine why or under what circumstance a normal person would accept slavery. Most slave owners purchased slaves to get “free work” out of them. Yet we see exactly the same conduct with the famous “company store” of yesteryear. A company made a store for their employees in order to make more money off of them.

But when we look at slavery, we are horrified at why people would sell themselves into slavery. Why? The answer is interesting. People saw the problems of their day and their country and their government, and didn’t like any of it. Unfortunately, they had no recurse to deal with it, except accept it. But then America was discovered and the founding fathers input into that new country  liberties. People fell in love with the concepts of America and the founding fathers that solved those problems in their own country, and they decided that however they had to do in order to get there, they would. These people paralleled the Latin who incur great debts with the mafia (narcos) that control this illegal immigration. What if they promise to pay and just disappear? The Narcos have the names and locations of all of their family, and they pay a nasty visit to them, and do violence to them. Every illegal that crosses the border with them (and the narcos put bracelets on them to identify who has paid them and if you do not have one of them, you will be killed or returned maimed to Mexico).

The Democrat party under Joe Biden, Nancy Pelosi, and Chuck Shummer are winking at all of this. They pretend to represent the illegal alien, but they do nothing to change this situation in reality. The illegals have to sell their souls to the devil (narcs) to get in, then they sell their souls to the Democrats to keep aid coming to them. They just heap one evil slave master on themselves after another.

America’s Founding Fathers and their attitude towards Slavery

It is important to realize that we get our morality from the Bible. That is God´s word to mankind, so what we know of right and wrong is not up for grabs, everybody spinning this how they want it. God has spoken, and we must understand him, not raise up our own opinions to importance over God.

The Bible never condemns slavery. It was an institution from ancient times. Within the scope of what we know, in history there were complete nations almost put into slavery, and liberated from slavery. Yet moral judgment against or for slavery is hard to find in the Scriptures.

In history, we find just as much slavery outside of Africa as in Africa´s history. In ancient Rome, the Romans had white slaves. In the hard world of their time, being a slave had its good points, because the owner had to feed the person and care for them. While nobody today in our world of government handouts and free healthcare for the poor would consider this, in the not so far past, people starved to death and horrible diseases decimated the population with little to no healthcare given them.

This is not a defense of slavery, but it is what it is. It was a way out of utter despair and misery. Perhaps they jumped from the frying pan into the fire, but in the short run, they had food and someplace to sleep.

The bottom-most point in slavery is very simply, sinful people make other people their slaves and take advantage of them. This is an outworking of the sinful nature of man, and there is no excuse for this. God placed salvation of a man´s soul from sin and its effects as an opposite and opposing force to sinfulness.

The Founding Fathers attitude towards Slavery

No matter what the founding fathers would have decided to do, they had to deal with the realities of civilization in their times. There were slaves in the colonies, and to unilaterally break all of those situations would have been very hard. They punted the football to later generations.

So don’t let politics cloud your understanding here. The two parties have different outlooks, and the modern Democratic party is no champion of blacks, nor women, nor illegal aliens for that part. They strive for power over the people, and they lie and twist and do anything they can to get it.

In the day of the founding fathers, the issue of slavery was that it was an accepted institution. People who were slaves (however they got into that position) had an obligation to work. The owners had obligations towards their workers. Even the slaves had rights although they were abused or even outright killed by angry owners.

All of this is not right.

Our founding fathers had the attitude of the equality of all men. While this would and should be applied to “all humanity” some would see that they are more equal than others. Within the elites of rich people, Hollywood, and politics, we see this commonly. Masks for the common people but when these elites party, no masks. Only masks for those that serve the elites.

We need to understand that there is a time factor to adjusting the problems of society. You cannot do everything immediately, and the founding fathers took steps toward fixing what was wrong. Lincoln and his Republican Congress completed that task as far as slavery is concerned. The Democrat party totally ignores their historic stand for slavery, complete with Democrats creating the KKK Klu Klux Klan, and their mighty efforts at suppressing the freedom of others. Today the Democrat party does exactly the same thing by allowing illegal aliens enter the country, but under a type of slavery, and living in limbo, aka the DACA kids. They are neither legal citizens nor are they aliens. They don’t know what they are, and they cannot go back to where they came from. They were born in the U.S.A.

More Articles about the US Constitution